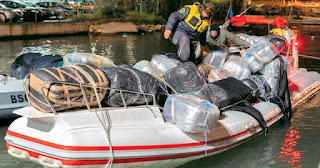 The Albanian “ÎºÎ±Î½Î½Î±Î²Î¹ÏƒÏ„Î¬Î½”, which last year had a production record 20 years, with plantations of indian hemp in almost all of the territory of a neighbouring country, “bombed” with huge quantities of hashish and every way possible, from land and sea, Greece and Italy…
Only on the Continent, in just a month and a half since the beginning of time, cops have confiscated a total of over 1.5 tonnes of hashish, compared to 3.7 tonnes all over the 2016, and just 400 kg in 2015. A large part of the 3.7 tons of 2016 were seized in the last few months of the year. To this must be added the considerable quantities that have been seized in the last few months by the port authorities to the axis of Corfu – Igoumenitsa – Preveza, and large quantities of Albanian hashish seized also by the officers of other regions-addresses in the country.

At the same time in the Adriatic is in progress, a daily war between the Italian Authorities -led by the Guardia di Finanza, a military structure, and the vessels of the Italian coast guard and the Albanian speedboats carrying large quantities, especially raw cannabis. These businesses are mainly held in Bari, Brindisi, Lecce, strait of Otranto, to the Ionian Sea opposite the island of Corfu and at a distance of less than 80 kilometres from the island of othoni island, and the gulf of Taranto, where the Albanian smugglers are finding a lot of shelters, but the waiting members of the Italian mafia, with the first of Lecce. Be noted that in the war with the Albanians traffickers of hashish, the Italian Authorities have the assistance of FRONTEX.

The negative reports by international organisations and especially that of the State Department, as well as the strong attack on the prime minister of Albania from the opposition, which is accusing him of in the first months of 2016 that has turned the country into a vast “ÎºÎ±Î½Î½Î±Î²Î¹ÏƒÏ„Î¬Î½, have forced Eddie Rama in folding. Thousands of Albanians, headed by the leaders of the opposition have taken to the streets since the beginning of the week asking for the resignation of his government. Accuse him that he and his party are reaping large sums from the drug trade, which will fund the campaign, with a view to the ballot box in June.

Insolvency
In the context of the folding of this the government of the Eddie Rama tries to show that it works very well with the Italian Authorities on the issue of countering the cultivation and trafficking of cannabis. The support of the Albanian side that is also happening with Greece, but the real data appear to indicate insolvency of the Albanian Authorities. The perpetual hammering of the opposition with a series of data on the vast plantations of indian hemp, Eddie Rama summoned communication the game of numbers. At the beginning of October the head of the Albanian state police argued that in 2016 they destroyed a total of 2.5 million. plants of indian hemp across the country, when this number in 2013 reached the 90.000, 2014 530.000 and in 2015 has touched the 780,000 metric.

However, the data from the last few months of 2016 and early 2017 indicate that much larger loads of indian hemp promoted by the Albanian traffickers both to Italy and to Greece. The data for just the first 40 days of the 2017 show that only the Italian Guardia di Finanza seized 9 tons of Albanian hashish, a quantity that has already reached a third of that seized the whole of 2016. In the war of the Guardia di Finanza and of the Italian coast guard used state of the art marine vessels as well as planes and helicopters are patrolling from the air.
Disappeared
On the night of 17 February a yellow van with Albanian license plates, arrived at the frontier station of Kakavia on the Greek-Albanian border, having passed without any problem the Albanian checkpoint. Police and customs have asked the Albanian driver to park in a specific spot to the right of the station, in order to control. “Don’t convey anything, it’s empty the truck,” he said, ” but when they asked him to open the door and saw that they had with them a dog-detector, she ran away and came back running to the Albanian customs office, which is located just 150 meters from the Greek. Went through this like a gentleman, and disappeared, since none of his fellow cops didn’t move to stop him.

Control the truck by the Greek police and customs that followed revealed that “surprisingly” had passed unnoticed by the special equipment on the Albanian side, who allegedly “scans” every passing vehicle: in the crypt under the floor in the trunk was found a quantity of one tonne of hashish, packaged in hundreds of bales, it took hours for it to be transferred and stowed in the warehouses. The perpetrator was identified the first time by the Greek Authorities, which have at their disposal the full details of, and called, and the Albanian Authorities, but until today is still missing.
“And neither are going to ever get caught, because they don’t want. Another who had a heroin a few days after they caught him. Anybody’s payroll, and stays immune,” he says in “Sunday Ethnos” a police officer with years of experience in business was a dea in the Greek-Albanian borders, but also in contacts with the police on the Albanian side in the framework of the bilateral cooperation. This collaboration has not yielded the expected operational level, while in the meetings that have been made in the past I missed, and the jokes, when representatives of the other side tried to elicit information for the passages that are kept by the Greek Police! At the same time, several times has recorded at least a reluctance by the police on the other side to act, even in the grossest cases criminal circuit. In a case on illegal crossing of the border of the border, Greek police officers witnessed the escape of drug traffickers in a distance of a few tens of meters from Albanian colleagues, who just stood there and watched.

The groups of storage
The leader of the EL.NES. Constantine Î¤ÏƒÎ¿Ï…Î²Î¬Î»Î±Ï‚, found in the middle of last week in Ioannina, attributed the credit to the local leadership of the Police for its performance in this area. The leader, who is An in the origin -of the Area – and knows the area well, spoke privately to the officers of the Narcotics and special groups guarding the pass to the border and tried to animate them, asking them to reflect on how many lives they save every time they “block out” a large quantity of drugs before they enter the country.
These groups have grown significantly in the last period, and closely monitor the passes along the ÏƒÏ…Î½Î¿ÏÎ¹Î¿Î³ÏÎ±Î¼Î¼Î®Ï‚, with physical presence and with the use of technical means, while carrying out targeted audits on the streets, on the basis of information collected from the other side.
The path of the ÎºÎ¬Î½Î±Î²Î·Ï‚
The shortest distance between the coasts of Albania and Italy is 70 km, while vessels with loads of drugs, starting mainly from the coast of Vlora, and Durres to the north.
CHRIST Î¤Î•Î›Î™Î”Î—Î£ – VASILIS Î™Î“ÎÎ‘Î¤Î™Î‘Î”Î—Î£ – ethnos.gr