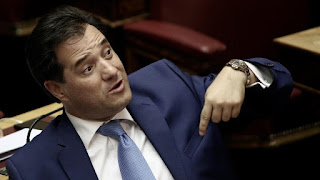 The vice-president of the New Republic relied on his own experience in LAOS and, implying that the polarization in the following with the…
SYRIZA would crush the small parties of the intermediate space, calling Stavros Theodorakis to think in view of the court that the next electoral battle, “we’ve got to give all the forces of reform against the populism of mr Tsipras and Kammenos”. By the same token, mr Georgiadis on the merits heralds a brave renewal SW in candidates, provided that the next elections be closed.
Asked for the stand which will keep the SW against the insurance, mr Georgiades commented that “we will submit our proposal as soon as the government with the troika. However, clear as to our general principles, we support the reduction of taxes, the liberal reforms, privatization and reduction of public expenditure, some of which obviously will be painful”.
With regard to the negotiation of the government with the Ï„ÏÎ¿ÏŠÎºÎ±Î½Î¿ÏÏ‚, the vice-president of the New Republic points out that, from his experience, “the negotiation is stuck, and that worries me a lot. Mr. Tsipras had to close the assessment from November. He has lost precious time and every day that passes will be more difficult not only for him and the party, but unfortunately for the country”.
Finally, stresses in an interview that “if lost, it’s stated, the only solution is elections”, as I don’t see how it can find common ground in a universal government. “We are ready to govern, but we are not asking for elections. But neither would give an alibi to destructive choices,” concludes.
Source