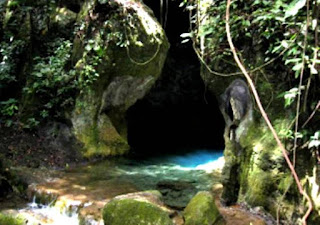 Our world is full of strange places. Parts which could cause us an incredible thrill!…
Below are 15 sites that are suitable for horror lovers. The fanatics of the sacraments and every creepy story, you will want to visit. We still don’t think so! Even the photos of them on our legs!
1. Abandoned house of the Communist Party in Bulgaria.

This building is hidden in the mountains of the Balkans. At the entrance there is an inscription that says: â€œOn your feet despised comrades! Feet you slaves of labour! Oppressed and humiliated rise up against the enemies!â€
2. Cemetery Of Chauchilla (Peru):

Due to the great drought in the region, the dead have been preserved in this ancient cemetery.
3. The chapel of Bones (Portugal):

This chapel houses the bones of 5000 monks. From the ceiling hang two bodies, one of which is a child.
4. Centralia, Pennsylvania.

This town was abandoned after subsidence of the ground by a fire in a mine. However, there are 1st people who refused to leave and are now living in this ghost town…
5. Hanging coffins, Sagada, Philippines.

It is customary for the members of the tribe Igorot to bury their loved ones in coffins that hang. This is due to the belief that the closer the deceased in the sky, the closer it is to the ancestral spirits.
6. Abandoned Station (Cincinnati, Ohio):

The rail lines of Cincinnati were started to be manufactured in the 1920’s but they stopped due to increased costs.
7. Old Jewish Cemetery, Prague. Also known as the Church of Bones, this Cathedral contains more than 40,000 bones of people who wanted to be buried in a sacred place.
9. Church of Agios Georgios, Czech republic. These otherworldly figures are statues of Jakub Hadrava, which were placed to keep the interest of the world alive. This church has been abandoned since 1968, when it collapsed the roof during a funeral.
10. Isle Of Plague (Poveglia,Italy): This island was quarantined from 1793-1814 hosting 160.000 people suffering from plague. Everywhere on the island you can find mass graves. From 1922-1968, the place was also used to house a psychiatric clinic. This belonged to a doctor, who it is rumored that he tortured and killed many of his patients.
11. Purchase Fetish Akodessewa, Togo): In this market it can procure what it takes spells of voodoo.
12. The hill of crosses (Lithuania). This hill has more than 100,000 crosses. Even the Pope has characterized as a place of peace, rest and love.
13. The city of the dead (Dargavs, Russia): He may look like a small stone village, but the Dargavs is hiding a dark secret. It’s full of graves!
14. Cave Of Actun Tunichil Muknal (Belize): These bizarre and scary caves contain the remains of about 14 people, including children! It is believed that they were the victims that were used for the sacrifices of the Mayans. There is even a whole skeleton, believed to belong to a little girl 18 years old.
15. The mummies of fire, the Philippines. To explore the caves that host these mummies have to wander 5 hours drive through the mountains and then walk another 5 hours. As it turns out, the dead is well-hidden!