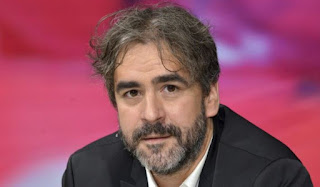 The authorities of Turkey Ï€ÏÎ¿Ï†Ï…Î»Î¬ÎºÎ¹ÏƒÎ±Î½ Monday the correspondent of a well-known German newspaper, who is accused of…
spreading propaganda of a terrorist organisation, incitement to violence and incitement to hatred, according to a person who was in the courtroom when he announced the decision, and in accordance with the employer of the journalist, Die Welt.
The news of the detention of Denise Î“Î¹Î¿Ï…Ï„Î¶Î­Î» is “bitter and disappointing”, considered by the chancellor of Germany Angela Merkel, adding that the measure is “disproportionately hard”, “Denise Î“Î¹Î¿Ï…Ï„Î¶Î­Î» presented himself voluntarily to justice, and has placed himself at the disposal of prosecutors to head) of the research”.
Initially the Î“Î¹Î¿Ï…Ï„Î¶Î­Î», which has a dual â€“German and Turkishâ€“ citizenship, was put under arrest on the 14th of February, after doing a story for e-mail messages that leftists hacker hacked from the personal account of ÎœÏ€ÎµÏÎ¬Ï„ Î‘Î»Î¼Ï€Î±ÏŠÏÎ¬Îº, minister of Energy of Turkey and groom of president Recep Tayyip Erdogan.
Last Monday a court in Istanbul ordered the Î“Î¹Î¿Ï…Ï„Î¶Î­Î» to custody in view of his trial. This is the first German journalist detained in the context of widespread persecution after the failed coup of 15 July. Many media outlets have been targeted by the authorities.
The Ï…Ï€Î¿ÎºÎ»Î±Ï€Î­Î½Ï„Î± e-mail messages, which were made public in September, shed light on the political pressures of the Turkish government to the MEDIA and the strategies of manipulation of public opinion in social networking sites.
Over 100,000 people have been removed from their positions in the context of the massive purge of the Turkish government to the public, the security services and the judiciary, but also in the private sector, after the attempted military coup. Of these, about 43,000 have been taken into custody. The Anchor claims that the measures it takes are necessary because it is threatened.
But the countries-allies of Turkey in the West, including Germany, express fears that the Recep Tayyip Erdogan and his government, in fact, fight every dispute. The bilateral relations have deteriorated, but Berlin needs the cooperation of the Turkish government for the implementation of the agreement with the aim of halting the migration flows towards Europe.
The arrest of Î“Î¹Î¿Ï…Ï„Î¶Î­Î» brings chancellor Merkel in a very difficult position, while remaining less than seven months before the federal parliamentary elections that are reported close.
“The German government expects that the Turkish justice, in the way that we handle the case Î“Î¹Î¿Ï…Ï„Î¶Î­Î» will take into account the value of freedom of the Press in any democratic society. We will continue to insist on a fair treatment of Denise Î“Î¹Î¿Ï…Ï„Î¶Î­Î» under the law and we hope that you will soon regain his freedom”, stressed Merkel.
The minister of Foreign affairs of Germany, the Î–Î¯Î³ÎºÎ¼Î±Ï Gabriel, was even more strict in the crisis of evolution, stressing that cast a “blinding light” on the differences of the governments of the two countries in terms of the way they treat freedom of the press and freedom of opinion.
In the court where it was decided the detention on remand of the Î“Î¹Î¿Ï…Ï„Î¶Î­Î» were present the consul general of Germany in Istanbul, Georg ÎœÏ€Î¯ÏÎ³ÎºÎµÎ»ÎµÎ½, as well as several members of the opposition, the Republican People’s Party (CHP), according to the news agency DoÄŸan.
On Wednesday, 166 German members published an open letter which called for the “rapid” release of Î“Î¹Î¿Ï…Ï„Î¶Î­Î».
After the failed coup of July 2016 in Turkey, more than 100 journalists have been arrested and are awaiting trial, 170 SMES have been closed and 775 accreditations of journalists have been revoked, according to a report on organizations defending the freedom of the Press.
Foreign journalists, like Rob ÎÏŒÏÎ½Ï„Î»Î±Î½Ï„ of the newspaper the New York Times, Dion ÎÎ¯ÏƒÎµÎ½Î¼Ï€Î±Î¿Ï…Î¼ in the Wall Street Journal or Olivier Bertrand of the site Les Jours were arrested and deported in the last few months.
Turkey is ranked in 151st position in the world ranking of the countries regarding freedom of the press for 2016 published by the NGO Reporters Without Borders (Reporters sans FrontiÃ¨res, RSF), between the Tajikistan and the Democratic Republic of the Congo.