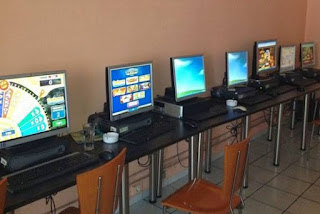 In the context of police operations for the department of Economic Police, for control and attestation of violations in businesses of sanitary interest…
conducting illegal gambling, a team of police officers of the Directorate, was spotted yesterday (15-12-2015) cafe in the centre of Athens, which had been converted into illegal “mini casino”.
For this case were arrested as temporarily in charge of the store a 57Ï‡ÏÎ¿Î½Î· resident, as well as a 66-year-old resident, an employee of the cafe and a 62-year-old alien, who acted as an observer out of the store. Against them formed file for violation of the legislation relating to games of chance, as and infringements of health character.
Co-defendant is the owner of the shop – the details of which are being investigated-, who is accused in addition to forgery, false Î±Î½Ï‰Î¼Î¿Ï„Î¯ deposit and infringement of the legislation on the protection of individuals from processing of personal data and sought to arrest him.
While the audit found violations of the insurance legislation and will be informed by the competent Services (D.The.Y., I. K.A. etc.) for the imposition of sanctions.
Noteworthy is the special security measures that were taken by the managers of a mini-casino with a view to circumvent the checks of law enforcement. In particular, the entrance to the store was made by a security door which opened with a remote control – a button, from the arrest of the 62Ï‡ÏÎ¿Î½Î¿ employee.
Also, in the outside area they had installed a special system of monitoring and surveillance, consisting of 6 closed-circuit television cameras for the surveillance of space and instant updates on upcoming audits by the prosecuting authorities.
During the audit identified 12 people-regulars who were detained in the Directorate of Economic Police to verify their identity, while found and seized:
8 computers,
2 table roulettes,
1 table at the illegal game of BLACK JACK,
3 tables gambling,
11 bundles of playing,
694 plastic chips of different colors and financial Î±Î½Ï„Î¹ÎºÏÎ¹ÏƒÎ¼Î¬Ï„Ï‰Î½,
2 sheets of handwritten notes indicating points.
3 network routers (router)
The seized evidence will be sent to storage to the Address of Customs Procedures.
The arrested with the file that was formed against them, were driven today to mr public Prosecutor at first instance of Athens while continuing the tax audit for the identification of the owner.