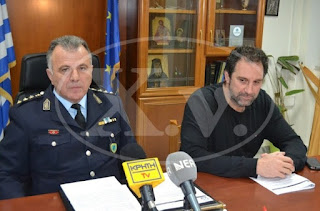 Two men aged 32 and 36 years old were allegedly involved in the robbery case and…
attempted homicide that occurred in the Fournes Monday 16 January. In the meantime, the knowledge of modern technologies saved from the death of the two elderly people while she was tied up the 81-year-old managed via computer to alert her sister in Australia and from there to inform the Authorities.
The solving of the case announced on Friday, the police director of Chania, Giorgos Î›Ï…Î¼Ï€Î¹Î½Î¬ÎºÎ·Ï‚ and the director of the subdivision Security Chania Paris Î§Î·Î½ÏŒÏ€Î¿Ï…Î»Î¿Ï‚.
As reported in the case involved two nationals of Albania who were arrested and confessed to their act.
In fact, one of the perpetrators, previously worked in the home of the couple and it seems that he knew his way around.
The offences which carry the two defendants is robbery by aiding and abetting, and attempted murder by aiding and abetting and serial. According to the police the accused entered the house of the old couple (88 year-old man and 81 years old woman) by uninsured door. Then overpowered them, tied them with wire hands and gagged using a cloth which they had brought themselves.
Immediately after they searched the house and removed cash amount of eur 1,200 and various jewels and valuables, while on their departure, they opened the supply of gas with the purpose of the two elderly people to find the death. However, the 81-year-old, while tied up, he managed to get to a laptop, using Skype to call her sister in Australia and from there to inform the Authorities.
The mobilisation of the Police was immediate and after abduction of suspects identified and arrested the two defendants. In their possession and their home were found the jewels that had been stolen, collectible coins, and the amount of 850 euro, which were attributed to the elderly.
In accordance with the Police during the investigations, the 32-year-old and the 36-year-old resisted strongly, while the 32-year-old allegedly not Î´Î¹Î­Î¸ÎµÏ„Î±Î¹ residence permit.
Source