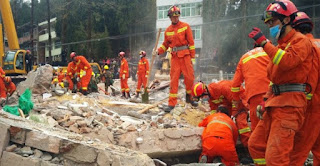 The collapse…
a block of flats in the industrial town Î“Î¿Ï…ÎµÎ½Ï„Î¶ÏŒÎ¿Ï…, in the eastern province of Zhejiang of China had resulted in the deaths of seven people, while two were rescued.
A 63-year-old woman was spotted alive yesterday at 22:40 in the evening, and a second woman was also detected live at 07:00 today. And the two were taken to the hospital.
Part of the five-story building in the village of ÎÏ„Î±Ï‡Î¿ÏÎ¹ collapsed yesterday, trapping the rubble, nine people from two families.