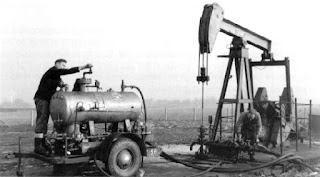 Written by Sotiris. ÎšÎ±Î¼ÎµÎ½ÏŒÏ€Î¿Ï…Î»Î¿Ï‚, Phd Candidate, Technical University Of Crete
In southwestern Iran are the Zagros mountains in which are found the asian…
the arabian tectonic-geological plate. There began the story of iranian oil in the early 19th century.
Since then, several European explorers, together with geologists trying to map out the regions of the Middle East in search of oil. The spark for the exploratory curiosity was sparked by the work of a French geologist-engineer-archaeologist (Jean-Jacques de Morgan 1857-1924).
The discoveries of de Morgan prompted a British businessman (William Knox d’arcy 1849-1917) to be involved in the search of Iranian oil. The first agreement between d’arcy and the then Persian government (Shah) ÏƒÏ…Î½Î®Ï†Î¸ÎµÎ¹ in 1901, creating the First Exploration Company (1903). The d’arcy hired a British mechanic in drilling by the name of George Bernard Reynolds (1853-1925).
The first drilling in the area of Chiah Surkh was disappointing and the d’arcy turned to German, French and American investors. In the same period, just before the outbreak of the first world war, Britain, being a naval world power, trying to change the use of coal in ships, on oil.
The use of oil in British ships would make the British Navy the most powerful Navy. The British government, which Î´Î¹Î­Î²Î»ÎµÏ€Îµ the upcoming war (it?) he didn’t want anything to be left to the Ï€Î¹Î¸Î±Î½Î¿Î»Î¿Î³Î¿ÏÎ¼ÎµÎ½Î± deposits of Persia to foreign hands. Thus was created another company co-funded by the British government, the Concessions Syndicate Ltd, and head of the d’arcy.
The new company turned to other areas to search for oil. After many failed attempts, finally in 1908 it was discovered a huge deposit of Masjid Sulaiman. The oil field that produced oil until 1979 (the year that launched the Iranian revolution with the Ayatollah Khomeini).
The claim that essentially began with the geopolitical changes in the Middle East. Changes of which even today we can see their results. The following year, in 1909, a new oil company was created which replaced the Concessions Syndicate Ltd.: it was the turn of the Anglo-Persian Oil Company (APOC), which in 1935 was renamed British Petroleum (BP).
Winston Churchill in 1911 became the First Lord of the Navy (First Lord of Admiralty: something equivalent to the secretary of the Navy), and was one of the key supporters of the APOC as well as believed deeply in the use of oil on ships of the United Kingdom. Once the company shortly before the outbreak of the first world war, has encountered financial problems, Churchill rallied for political as well as Î´Î¹Î­Î²Î»ÎµÏ€Îµ the upcoming war.
As a consequent, since then, the Churchill, together with the T.E. Lawerence (known as Lawrence of Arabia), were the main “players” in the geopolitics of oil and the formation of the then borders of the region. In 1916, signed secretly a treaty between the United Kingdom, France, and Russia (Treaty of Sykes-Picot) which essentially launched the formation of the post-Ottoman states in the region…
There are two ways to face someone reality. These two modes represent two different ways of thinking. One, is the analytical. E.x. the phrase “the cardiologists are doctors” is an analytical thinking which is based on the knowledge of all of the words that form this phrase. The other way of thinking is synthetic, for.x. in the phrase “the cardiologists are rich,” the meaning of all words is known, but as a whole, we do not know exactly if the sentence is true or not.
In this article chosen the second way to demonstrate the suspicion lingering in the global neo-geo scene… A suspicion of a return to conditions of earlier times, where a central role in the conflicts and the reform frontier and the member playing the wealth-producing resources (resource wars).
Source