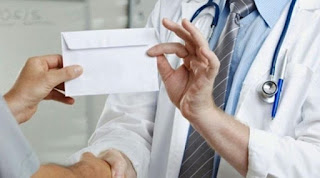 One in…
three Greek gives “sachet” for care in a public hospital, as reported by the general inspector of Public Administration,
Leandros Stars, “Daily”, citing a recent study by the teachers K. Misty, I. Tounta and L. Î›Î¹Î±ÏÏŒÏ€Î¿Ï…Î»Î¿Ï…, in a representative sample of 2,741 citizens from all over Greece.
Mr Stars estimates that one-third of the doctors it requires the “sachet” a third takes whatever offer the patient, while the rest of us don’t like bribes on principle.
The amounts range from 200 euros for a normal birth or a simple eye operation to over 5,000 euros for serious surgeries. But, in the crisis, is made and negotiated, since, according to mr. Î¡Î±ÎºÎ¹Î½Ï„Î¶Î® k “sachet” follows the law of supply and demand.
From 2007 to today have been deposited with 428 complaints about doctors in the NHS, from 2009 to today, 31 doctors of IKA and from 2012 to today, 4 for pharmacists in the NHS, for “sachet”.
Source