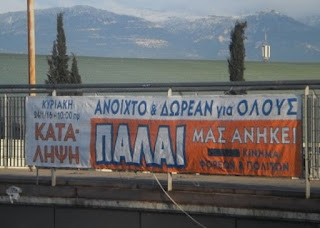 Their decision to occupy the site of the Town of Utah, and its use for needs of the local community, as was the initial political commitment of the period…announced the start of the project, publicised by the residents and the operators of Utah. Always under the condition that there will be developments that will lead to a change in tactics. Already, the FUND is proposing a six-month concession of a Town in the municipality of Galatsi so pending the evaluation of the proposal from local bodies. Until late in the evening of Friday, have evolved to the extraordinary meeting of the municipal council on the proposal of the FUND, while meeting they had, and other local entities at least rapporteurs rejected the proposal. Like date of occupancy, prior to these developments, was set for Sunday 24 January at 10am. It is noteworthy that on the same day the Municipality of Galatsi has announced the holding of a road race with start and end at the site of the Palais.
It should be recalled, as it was present, and the www.ert.gr with on-the-spot reportage, that on 13 December 2015, hundreds of residents of the area together with the Municipalities of Galatsi and Nea Ionia, as well as amateur sports clubs, had been at the site and toured the facilities.
Yes attempted and the prosecution of officials in security from the police, after a complaint that they have not done their duty, that is, the three to prevent hundreds of people to enter the space. The arraignment was cancelled after intervention of the Mayor Utah C. Markopoulos.
Yes, a little before the end of 2015 was held and city council of the Municipality of Galatsi, since it was preceded by cleaning of the facilities.
Thursday 21/1/2016 a delegation of residents and employees of Local Administration cut the padlock of the door of the Palais, which created reaction to the FUND under the supervision of the space.
Therefore Sunday is expected to be found in the area a large number of citizens for different reasons, by athletes who will take part in the race and will not come necessarily from the area, the Local Government, citizens ‘ movements, etc

In a recent Press conference that is posted on the website of the Municipality, the Mayor of Utah George ÎœÎ±ÏÎºÏŒÏ€Î¿Ï…Î»Î¿Ï‚Ï„ÏŒÎ½Î¹ÏƒÎµ, inter alia, for the specific event:
“It is a special price that the “Attica Bank 3rd Run & Fun Grand Prix” starts from the Municipality of Galatsi.
This event is a first-class opportunity to showcase the sport in our city and to mobilize the world to us. As a municipality we are implementing our vision, in order to become Galatz in an important sports destination.
Important for us is to showcase a major concern of the city, as is the requirement of assertion of the closed Olympic Gym of Utah, and the starting point and the finish of the race will be outside the entrance to the Olympic installation”.

From the side of the movement actors and citizens to the rescue of the Palais in a communication received after the meeting on 22/12/2015, stresses, inter alia, that:
“We declare our full support in claiming the entire plant, in favour of sport and culture to the youth of the region and its respective entities . The overall utilization will be gradually introduced after the study that will be assigned to the E.M.E. following programming convention, the other legitimate way.
We declare the absolute conviction that for the success of this great objective and the efficient operation of the installation according to the location, as a Public space, sport and culture, continuous and close cooperation and participation of all three Municipalities, together with the movement, offer the necessary power ( dynamic) to counteract any political and economic problems arise
We ask you to move expeditiously the procedures for setting up local institution, for the proper functioning of the installation, and the assignment ( E.M.E. ) and a monitoring study of operation, maintenance and feature development of soft energy systems, in order to shrink operating costs.
We declare, finally, that our determination to defend today’s decision by every legal means, but racing when necessary.
We point out the need to transfer part of the activity of the bodies of the city – region to the already available spaces of the as and the need of systematic information of the operators and residents of the area around the vital for the city â€“ region issue”.
In parallel with the race and the movement for occupation of the Palais, just across the street at 11.30 am, will give a football game the Crown Utah, amateur association, which recently organised a race of solidarity with the refugees who had resided in the Palais and now have been transferred, while in the five-minute way, at the municipal stadium of Nea Ionia, the typical home team and imaginative in the slogans of his friends Asteras Exarchia, will give their own present with Ï€Î¿Î»Î¹Ï„Î¹ÎºÎ¿Ï€Î¿Î´Î¿ÏƒÏ†Î±Î¹ÏÎ¹ÎºÎ® soundbites.
The truth is that the specific area (border of the Municipalities of Galatsi and Nea Ionia) Sunday 24 January will have a lot of outbreaks with interest.
Source