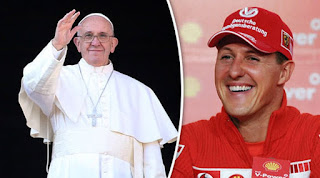 Pope Francis, who at times has shown the practical interest for the problems of ordinary people, I remained unmoved to the appeal of Jean Todd, president of the FIA (Federation Internationale d’ Automobile), to pray for the recovery of the ex-pilot of Formula 1, Michael Schumacher.
In an interview he gave recently the head of the International Automobile Federation (FIA) to the radio station of the Vatican Radio Vaticana, has revealed that he met with the Pope Francis, when the primate of the roman Catholic church visited the offices of the Federation to see a video related to the campaign for road safety. Jean Todd has stated in interviews that there was a friend of Schumacher, said that he asked the Pope during the meeting that he had with him at the offices of the FIA to pray for the ex-pilot of Formula 1 and he answered him with joy in the affirmative.
Yes, Pope Francis asked Todd for the course of the health of Schumacher, who after the serious injury on 29 December 2013 in the French Alps while he was skiing with his son, is a patient in a specially equipped room in the house, near the lake of Geneva in Switzerland.
The Schumacher suffered permanent brain damage after the accident in the Alps, and the news about the course of health is extremely economical from the representative of the Sabine Khem. In December, a German magazine had reported that Schumacher started walking, but the Kem denied the report and said: “We are pleased to say that the health is improved, but I am saying this taking into account the severity of the injury. Of course it will take a long time for those who are involved in this “battle” and we are happy to give to you”.