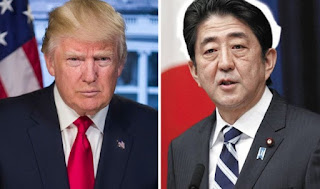 The extension…
meeting the plan the Japanese prime minister Shinzo Abe with the American president Donald Trump in Washington, which was originally scheduled for 10 February, according to two sources of the japanese government.
At the top of the agenda of the talks will be issues such as the forming of bilateral trade relations, but also the policy that will follow the two governments, with regard to the exchange rates of their currencies.
The Trump has criticised the lack of access of the american automobile industry in the japanese market, while it has been criticised in Tokyo, for the conduct of monetary policy, as the depreciation of the exchange value of the yen.
After the meeting with the American president, Japanese officials are planning a second meeting of Abe with Trump, in the private resort of the second ,Mar-a-Lago, in Florida, on the 11th of February. The Trump and the Abe, it is possible to play even golf, according to the same sources.