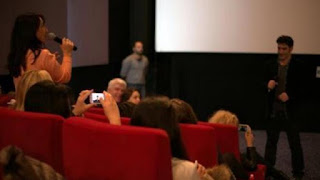 Shocking the short placement teacher from Albania which lives permanently in Patras for over twenty years with her family. At the end of the projection of the movie “another world”, which raises the very serious problem for Greece on migration and foreigners who wish to ÎµÎ½Ï‰ÏƒÎ¼Î±Ï„Ï‰Î¸Î¿ÏÎ½ in the Greek society, this woman took the microphone and touched public and Christopher Craven. The actor – director and creator of the film, was found in Patras, greece, gave a press conference and at the end of the projection he answered questions from the public while discussed with them issues of concern to the Greek society and which have a reference to the movie.
“Congratulations on your movie. We who are from another country and we live in Greece, we were shocked. It was like we lived… Many of these we’ve dealt with,” said the teacher of the Albanian language, which noted that he lives and works 20 years in Greece, love the country, feel Greek and are teaching kids that they have to defend Greece as Albania. Then the reason of it moved the audience and the Christoforos Papakaliatis left the microphone and excited clapped her:
“We are with you. We are one. Involved in everything. The obligations and requirements of Greek society. We will help you to make Greece strong, as it was before the crisis”!
Source