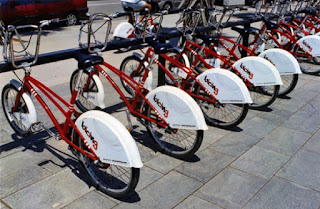 A new era in terms of traffic level, also in the Achaean capital, was inaugurated with the introduction of use of shared bicycles for the citizens of patras citizens of the Municipality.
Not one, not two, but 400 bikes will make their appearance in a few days in Patras, which will give in addition a “breath” to the traffic problem facing the city for many years.
For this reason, with the sole item on the agenda of the positions will be placed in the shared bikes in Patras, greece, in the framework of the community action GIFT shall meet in special session today, the Committee on Quality of Life of the Municipality of Patras in order to approve proposed locations.
The points Ï…Ï€Î¿Î´Î¹ÎºÎ½ÏÎµÎ¹ with ÎµÎ¹Î®Î³Î·ÏƒÎ® the Department of Transportation & Traffic Planning division Urban design – Traffic Design & Construction is:
1 Square of National Resistance (on the north side of the square, opposite the building of the Municipal Conservatory of
2 Square of Three Allies, as an extension of the already installed system from the Municipality of Patras (space between the islet that is located in the view of the pier of St. Nicholas and of the shared green, located to the south of this
3 king George I Square, as an extension of the already installed system from the Municipality of Patras (in the parking zone on the southwest side of the perimeter road of the square Georgiou Aâ€™)
4 Kapodistrias Square (on the northwest side of the square, in contact with the pedestrian area of the Email. ÎœÎ·Î½Î¹Î¬Ï„Î·)
5 Square High Alonia (in the parking zone on the northern side of the square on the road Karaca, near substation PPC)
6 28th October Square (Pindos) (in contact with the eastern sidewalk, near the square
7 Pedestrian street Three Admirals (on the North branch, at the junction with the road Maizonos, close to the lateral entry of the 2nd junior high School of Patras)
The system of Stations for the Disposal of Communal Bicycles (Î£Î”ÎšÎ ) is to be implemented in the framework of the project GIFT 2.0: Greece-Italy Facilities for transport 2.0(Greece-Italy 2007-2013) Program of Territorial Cooperation Greece-Italy 2007-2013) of the Region of West macedonia. Greece, extrapolating the current MS that was installed in the framework of the project, CIELO, and will include: 8 Stations for the Disposal of Shared Bicycles (Î£Î”ÎšÎ ), with 40 total parking spaces, fifty 50 bikes special construction for urban use and software for the management of the system.
Seven of the positions are the above recommended, and the extra 8th proposed site is in the docking station passenger “Panagiotis Kanellopoulos” which is to be approved by the patras port authority s. a..
Source