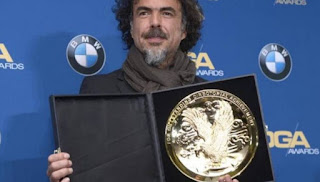 For the second consecutive year Alejandro Î™Î½Î¹Î¬ÏÎ¹Ï„Î¿Ï… director of “the Revenant” with Leonardo dicaprio, wins the …award in the “director’s Guild of America”. This is for the prizes of the Association of American Directors which took place shortly before the Oscars and show the trends… “I didn’t expect the award, honestly. I got paralyzed, but tough guys don’t cry,” said the great director has just been announced the ceremony. Running mates for the award were: Tom McCarthy’s “Spotlight”, Adam McKay for the “The Big Short”, George Miller for “Mad Max: Fury Road” and the Ridley Scott’s “the Martian”. Award during yesterday’s ceremony, also received the British Alex Garland’s “Ex Machina”. Now the lights turning on ceremony of the academy awards. Will win the Î™Î½Î¹Î¬ÏÎ¹Ï„Î¿Ï… second streak academy awards, which this year is worth more?
Source