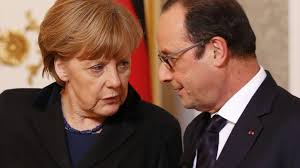 In a nice restaurant in the “heart” of the Strasbourg…
combining quality and good prices will be dining today the French-German axis.
Merkel and Hollande will enjoy a sumptuous dinner for the second time in a year in Strasbourg, choosing this time a restaurant “cut and sewn” in the measures of the crisis .
This time, the leaders of Germany and France will cross the threshold of the restaurant “Au Pont Corbeau”, with wooden chairs and plaid tablecloths.
“They wanted a classic and comfortable restaurant that combines the quality and good prices”, as stated in an announcement of the town hall of Strasbourg.
I will, however, only the two of them in the restaurant, but will accompany them and the president of the european Parliament, Martin Schulz.
The refugee crisis and the fight against terrorism, but also the best way to avoid a “Brexit” – the way out of London by the European Union) will be in the “menu” of three political leaders who meet again ten days after a summit in Brussels.
As stated in the French newspaper “Le Parisien”, Paris and Berlin have multiplied their contacts with Greece and Turkey in the last few days in order to limit the refugee flow.
It is worth noting that, a year ago, the partners of the franco-German axis together with Schultz were dining on 30 January 2015 in Strasbourg, with the main menu of the Greek crisis. Had chosen the restaurant “Zuem Ysehuet”.
Source