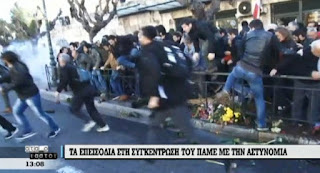 WE make revolutionary workout from the morning to the government…
After the morning’s occupation of Herodes Atticus out of the Maximos Mansion, the march which started from the ministry of Labour was attempted to be blocked at the height of Î»Î¿Ï…Î»Î¿Ï…Î´Î¬Î´Î¹ÎºÏ‰Î½ but many members of the GO were able to break the cordon of police.
An elderly protester at the time of the episodes of lost consciousness and was provided first aid by the other protesters.
The police in order to stop them he use grenade flash – bang, but chemical but it has not been able to stop them. Followed a melee between police and demonstrators. Finally, part of the course arrived just a breath away from the Herod Atticus but they met again strong police forces have blocked the road to the prime minister’s office.The rest of it was in the morning outside the Maximos Mansion after consultation with the officers fled the area and met with their companions in the Sophias.
The time of surprise
The protesters in the morning, showed up unannounced with three tourist buses, the transit of which is allowed in the street of Herodes Atticus. In front of the Mansion, however, the buses stopped suddenly and came down the protesters. The police forces who are there, have prevented the archbishops to move towards the Mansion, who at this time remain on the opposite sidewalk, shouting slogans against the insurance.
The mobilizations in support of the GO will continue and will include strikes warn the members of the GO featuring Î±Î½Ï„Î¹Î±ÏƒÏ†Î±Î»Î¹ÏƒÏ„Î¹ÎºÏŒ the law promoted by the government.
Source