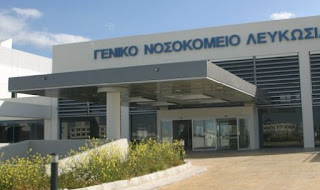 Written by Stelios Stylianou
Was not done in the right way, with the arrest of his client claims in …
ThemaOnline the lawyer Yiannis Polychronis, representing the 38-year-old, who was arrested on Friday afternoon 10/6 in Latsia after a car chase.
According to mr Polychronis, the client, in a telephone conversation that they had, he reported that he was brutally beating by the Police of the Î¥ÎšÎ‘Î in their effort to arrest him, with the result that transported then to the Hospital for treatment.
As has informed the lawyer, the 38-year-old is being treated under guard at Nicosia General Hospital, after bring serious injuries from the attack of the Police, as alleged by the side of the arrested person.
Read the position of the Police: Vertical the Police for the 38-year-old: “Beat three cars and attacked brutally and police”
The 38-year-old examined and a forensic pathologist Marios Matsakis who told the website that the verdict has been delivered to mr. Polychronis, adding that he can’t reveal his findings, stressing, however, that the complaining bring injuries to the body.
In addition, the 38-year-old in contact with his lawyer, complained about threats received from the Officers of the guard and had as beneficiary the same but the pregnant partner as she claims to be.
What does the Police
In our conversation, mr. Stelios Sergides (spokesman of the Î¥ÎšÎ‘Î) stated in the ThemaOnline that the 38-year-old brought resistance during arrest and was used by Officers of such violence.
During the process of arrest of the fill, was injured and a member of the Î¥ÎšÎ‘Î who was admitted to the Hospital for first aid.
“Now the arrested person is located in the first aid of the General Hospital of Nicosia, upon his request, and we don’t know if it will stay there,” was the concluding comment of mr. Î£ÎµÏÎ³Î¯Î´Î·.
Source