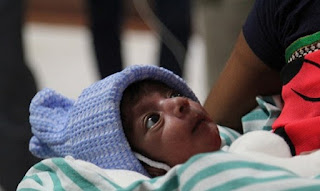 “Gift from god”…
considers the 23-year-old Lalitamma the little boy who gave birth in January in the town of Karnataka of India. The boy had been born with four legs and two penises.
The 23-year-old and the 26-year-old wife of Chennabasava they didn’t want initially child into surgery and prefer to raise as it was. Besides, the family was poor and could not meet the costs incurred.
Eventually the doctors convinced the parents, and now, after successful surgery, the boy has two feet – and a second chance at life.
“The entire surgical team examines the case of the child, is for us a difficult case,” said Dr. Divakar Gaddi.