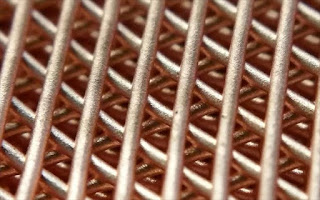 New horizons in the field of three-dimensional printing (3D printing) is opening… method developed by researchers at the Northwestern University, for the printing of three-dimensional metal objects.
These methods are based on large volumes of powder metal and expensive laser and beams of electrons – however, the new technique of Northwestern University uses liquid “inks” and simple kilns, resulting in cheaper, faster and more uniform procedures. As it turns out, this method is ideal for a wide range of metal, alloy etc.
“It’s exciting, because the most advanced construction methods used for metal printing have limitations in terms of what metals and alloys can be printed and what types of architecture can be created,” says the Î¡Î±Î¼Î¯Î» Shah, assistant professor of Materials Science and Engineering at the McCormick School of Engineering and Surgery at the Feinberg School of Medicine, which led the study.
Conventional methods of 3D printing of metal structures is a costly and time-consuming, and require and strong sources of concentrated energy (laser or beam of electrons). The new method bypasses many of the “problematic” points, through the creation of an “ink” of metal or mixed metal powder and other elements, in liquid form. The resulting material solidifies and integrates quickly with the material that has preceded it, allowing for the quick creation of very large objects.
The job of researchers is described in a paper published in Advanced Functional Materials. The coefficients of the research envision the utilization of the method in a wide range of applications, from printing of batteries, medical implants, etc. until mechanical components for bulky objects, such as missiles and aircraft. Also, it could be used for on-site construction, bypassing often lengthy supply chains/ suppliers.