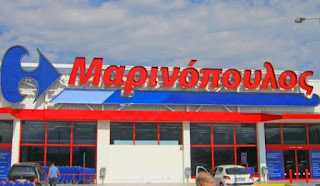 The Board of directors of the Association having as new given the latest developments…
in the business, making known in every direction that it will fight, with all colleagues in the company but also the entire working class of the country which shows massively and actively support the workers at Ralph and their Union, in order to ensure in full the rights of all of us.
The Administration of our Association with calm and responsibility, as it has done for decades now, making use of every form of struggle, and using every trade union and an appeal, I would fight with all her power and will make any intervention that is indicated by putting first priority to ensure all of the jobs and timely payment of the salary of June and the allowance of a licence.
Invites once again all the employees at Costco nationwide, united, and united like a fist around the Club and the Administration, to give with unity and determination, and this battle, as they have done repeatedly in the past with success and to be sure that you are not going to disappoint.
For the D.P.
The President is the Head of The C. P. The Yen. Secretary
Mavrakis Matthew Î§ÏŒÏÏ„Î·Ï‚ Thomas ÎœÏ€Î±ÏÏ‡Î±Î»Î±Î¼Î¬Ï‚ Michael