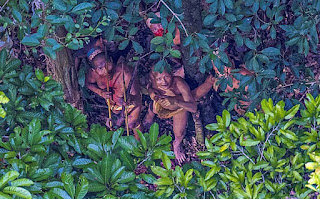 Aerial photographs of an isolated tribe that lives in a tropical forest of Brazil give you a shocking new look at a…
neolithic way of life that has almost disappeared from the face of the Earth.
The high-resolution images, taken from a helicopter last week by the brazilian photographer Ricardo Stuckert, offer an unprecedented “taste” of a vibrant community of indigenous people who live in complete isolation in the depths of the Amazonian jungle.
“I felt like I was a painter of the last century,” said Stuckert, describing his reaction when he recorded for the first time the tribe and declares that “it is a very powerful feeling to see how in the 21st century there are still people who have no contact with civilization, living as their ancestors before 20,000 years”.
In the close-up photographs of Stuckert, who were taken near the border of Brazil with Peru, see the details in respect of the isolated tribe, who had escaped the attention of experts, such as the use of sophisticated colors with which they paint their bodies and the way in which they cut their hair.