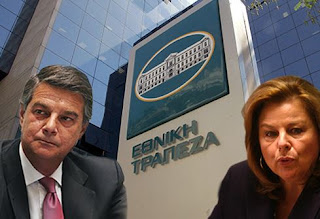 Writes Spiros Rizopoulos
The big deal is finally “closed” the… National and this is undoubtedly a significant success for the administration. With the sale of the shares of the Turkish bank Finansbank in the bank of Qatar, the National succeeds at a very difficult time to boost its liquidity by about 3.5 billion. euros in total. After the successful of this motion â€“ that we had long to see in the Greek banking system â€“ the National becomes de facto the strongest bank in the Greek market in terms of capital and liquidity. And most importantly, can no longer by a new base, to utilize this liquidity and to get the head for the adjustment of the national economy and the turn to development.
I note especially that last one as it is completely irrelevant to the fact that the President of the National Luka Katseli was recently found in the “crosshairs” of various “Î¬ÏƒÏ€Î¿Î½Î´Ï‰Î½ friends” to the wider political and banking environment, who do not lose chance to “gnaw on”. With the successful deal in the hands of most, the Luka Katseli presses firmly on her feet and the administration of the National will remain committed to the objectives of the strategy has been drawn up for the development of the same, and the strengthening of the Greek economy.
The National champion in the banking sector from ÏƒÏ…Î³ÎºÏÎ¿Ï„Î®ÏƒÎµÏŽÏ‚, found in the last years in the maelstrom of changes that downloaded from the first position. Did the links with the state, which gave rise to the suspicion of the troika, which took care of all the benefits of the consolidation of the banking sector to go to other banks, while the pressure on the Highway was standing. When other banks Ï€ÏÎ¿Î¹ÎºÎ¿Î´Î¿Ï„Î¿ÏÎ½Ï„Î±Î½ with healthy assets, such as, for example, the fate of the Rural Bank, after the separation of the good and band bank, the National was on the “outside”.
And if you bore to this pressing National, this was largely due to the contribution to the profitability of Finansbank. The acquisition of the 2006 is a big bank feat the then governor of the Takis Arapoglou, who in this movement has shown a rare insight for a Greek banker. It is no coincidence that he, too, was fought against a “system” phobic and timid, which counts all accounting terms a excel, unable to envision and plan a strategy over time.
Well, it looks like this cycle which has elapsed between the administration Arapoglou and administration Katseli closes here and the National have all the conditions to return to the top. This “ÎµÏ€Î±Î½ÎµÎ½Î¸ÏÏŒÎ½Î¹ÏƒÎ· of the queen” is based on the “name” in the deposit base remains strong, and the acquisition of most of that liquidity that enables the repayment of ÎºÎ¿ÏƒÏ„Î¿Î²ÏŒÏÏ‰Î½ debts and on the other hand, support a healthy development for a restart.
The take-off of the share of the National after the closure of the deal is “vote of confidence” in the “new era” of the National.
Source