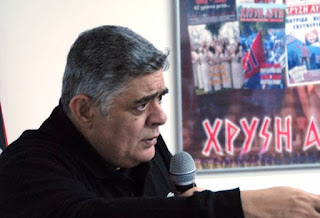 An interview with the General Secretary of Golden Dawn on the journalist Kostas Papadopoulos for the paper “Background”…
Canisters against SYRIZA and Turkey fires through the “P,” the General Secretary of Golden Dawn, Nikos ÎœÎ¹Ï‡Î±Î»Î¿Î»Î¹Î¬ÎºÎ¿Ï‚, on the occasion of the developments in the refugee – migrant issue, which have brought Greece with one foot outside of the Schengen Treaty.
“The states of Europe are closing down one after the other, their borders, while we had a formal proposal from another european country, be regarded as the EU’s borders of Macedonia and not the Greek,” says initially, mr. ÎœÎ¹Ï‡Î±Î»Î¿Î»Î¹Î¬ÎºÎ¿Ï‚ and continues in a very aggressive style for the Anchor: “at The same time, we are in the tragic position to be funded by the Germany continuously the Turkey, while the flow of illegal immigrants and refugees in Greece has not stopped, despite the commitments it has made”. Wonders, I don’t: “I Would like to know, all these people who pretend to be humanists don’t have to say anything about this criminal Turkish para-state, which leaves to sailing boats â€“and even prohibitive for large vesselsâ€“ with the result that drown children?”.
At the same time, set off an enormous responsibility in the current government, stressing that “the problem is not present. Even Antonis Samaras as the prime minister had spoken at a Summit for 1.5-2 million. refugees and illegal immigrants preparing to come to Greece. Only in 2015 came in for 950,000 people. Why? Because those who organize these undertakings â€“slave trade literallyâ€“ saw with the advent of SYRIZA to power up a sign in the country that says “open for business”.
Nikos ÎœÎ¹Ï‡Î±Î»Î¿Î»Î¹Î¬ÎºÎ¿Ï‚ speaking for “miserable regime there is with the NGOS in the islands of the eastern Aegean. In Mytilene, in fact, have been installed islamist organisations, which have been blamed even for transportation of munitions to the jihadists”. THE C.C. Golden Dawn does not leave unremarked, nor the aversion of Alexis Tsipras for the sea borders, asking “not to speak of the hypocrites of SYRIZA for sea borders that cannot be guarded. The Youth of the party the do concentration to fall even with the fence in Evros. That is, they want to abolish even the land border”.
The question of whether “a better border means a sinking ship”, mr. ÎœÎ¹Ï‡Î±Î»Î¿Î»Î¹Î¬ÎºÎ¿Ï‚ answer: “No, we’re sinking the boats coming in, but to demand that Turkey stop sending ships. And to ask the EU to push this Turkey. However, Europe is not only the presses, but the finance too untold amounts”.
The debate arrives and on political developments, the leader of the nationalist party stresses that “the country is bankrupt. The new memorandum, that the Golden Dawn did not vote on the 14th of August, it’s not coming out. I wonder at the audacity of the New Democracy, PASOK and the party River, who voted for the memorandum of SYRIZA, and they’re just pretending now branding”.
To a question from the “P” is the attitude that will keep the people’s Association if it comes up in Parliament a new electoral law, mr ÎœÎ¹Ï‡Î±Î»Î¿Î»Î¹Î¬ÎºÎ¿Ï‚ clarifies: “There is a thin point. This is the limit of 2%, because if you drop the threshold for entry into the 2%, there is a very strong chance of becoming â€“with the blessings of the Turkish consulateâ€“ minority party. Such a party would get many votes, not only in Thrace, but in the rest of Greece, with the Ï€Î¿Î»Î¹Ï„Î¿Î³ÏÎ±Ï†Î®ÏƒÎµÎ¹Ï‚ that have been made in the last few years. That is why we will be opposed. In pr we say “yes”, but the law will come as a whole”.
A report in the british newspaper “Telegraph” that he wants the Golden Dawn is funded by Russia, claiming that “due to the judicial our adventure, which continues, has become a full control of our economic data. The Golden Dawn is not a relationship of dependence with any foreign state, nor with Russia”. 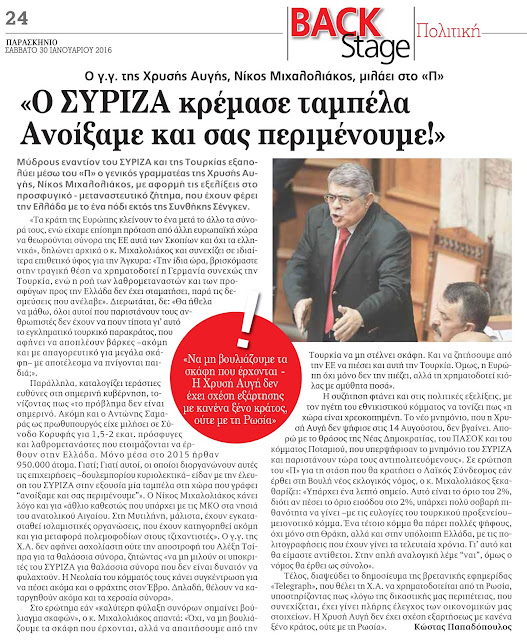