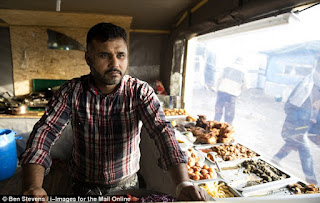 It is one of the most busy and famous chef in France and now… the Afghan Mohammed Safi has a new dream: to make the next culinary surprise in Britain.
As reported in the Daily Mail, the 37 year old owner of the afghan restaurant on the camp that has received the nickname Calais Jungle: this is a huge camp â€“ a camp in Northern France where they live in temporary accommodation thousands of migrants who had attempted â€“ unsuccessfully – to enter Britain.

A any daily, with the help of 36 friend of the Sulta Stankal (pictured above), serves up to 500 people and do it quickly and efficiently, cooking meals that most customers describe as “distinctive” and pay what everyone can.
Now, Mohammed Safi, from Kunduz, Afghanistan, and a father of six, envisions the next business step: the creation of a corresponding restaurant in Birmingham and the reunion, on the british most ground , with his children and his wife that has been left behind in the troubled by the wars home.

“They make me compliments for my food, and this shows that I know what I’m doing,” says Mohammed.
In Kunduz, the town, was attacked by the Taliban last year, and it continues until today to be the theatre of everyday battles. This means that no one there is safe. Mohammed left his home country when it was threatened by Taliban, and bore a long and painful journey to France.

“I have my wife and my six children there, but there’s no future in Afghanistan,” says and continues: “to be honest, my restaurant here in Calais is something temporary. In the mornings, and the afternoons are spent cooking and serving, but my nights I dedicate my efforts to get in Britain”.
“All I want is a stable future and just be able to find asylum in Britain, then my priority will be to bring my family there. And then I can concentrate on creating the best afghan restaurant in Britain. My dream has come true”.

The two friends earn hundreds of euros a day with the meals that they offer
Mohammed arrived in Calais last year. At that time, the camp’s expanding every day and building more and more wooden huts.
“We got one of those wooden structures and opened the restaurant,” says Mohammed. “The food we buy from local wholesalers. Some come and deliver the food in our camp… our specialties are dishes with chicken and lamb, but we do a lot of traditional vegetarian meals. We’ve created a place where people can sit and have a wonderful time eating with friends, while others take packets of food for the house. Customers pay what they can. Our priority is to make as many people as possible happy and fed”, it completes. As for costco, they charge very little and it is considered that the local butchers that run them Muslims, of give free the meat stew. He, however, won’t confirm that.

A bad day, the profits can be as little as 5 euro, but usually amount to hundreds . Another speciality is the so-called Kabuli Palaw, an afghan dish of rice, carrots, raisins and lamb.
In the Jungle Calais, which hosts about 6 000 refugees from Syria, Afghanistan and Eritrea, there are about 10 restaurants, from ÎºÎµÎ¼Ï€Î±Î¼Ï€Ï„Î¶Î¯Î´Î¹ÎºÎ± up and more formal restaurant. Last year, in fact, has been organized so well that it has now been outside of restaurants, places of worship, barber shops, and even a disco.