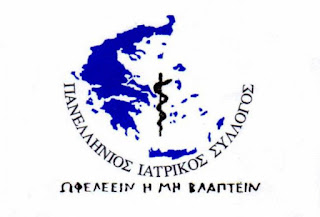 Read the announcement: “Meeting of the Presidents of the… Scientific Institutions of the country takes place tomorrow, Wednesday, January 27, at 12: 30.m., the offices of the Panhellenic Medical Association.
After the meetings with the Prime minister and the Leaders of the political Parties, but today’s pre-agenda debate in Parliament on the insurance, the Chairs of the Scientific Bodies will determine the further actions against the particular government plan.
It is noted that the Fifth 28.1.2016 the offices of the Medical Associations of the country remain closed in protest. Also, on 28 and 29 January, doctors across the country would abstain from any bureaucratic process (memberships in committees other than the DISABLED, reports, certificates, etc.).
On 1 and 3 February, the doctors will refrain from the electronic prescribing system and the 4 of the month will participate in the strike of GSEE and ADEDY along with all the scientific and professional bodies.”