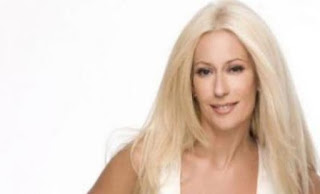 “I was very different then and the course if…”.Interview to the magazine “YOU” and Tina ÎœÎµÏƒÏƒÎ±ÏÎ¿Ï€Î¿ÏÎ»Î¿Ï… gave Maria Bakodimou and, among other things, spoke about the “RE Live”, expressing, at the same time, the complaint in relation to the show.
Below follows an excerpt of the interview:
Video how is for you?
Stationary. The economic crisis in captures and creates a bad mood stagnation.
Can you give me the impression that you want to do something else but the crisis does not leaves you…
No, something else necessarily, though I would like. I just “RE Live” I would like to be more rich in terms of the budget. With the crisis at work, but a misery.
You think that it is a “worn out” show?
It’s a little undeserved. I would like to be in a specific time and has a fixed appointment with the viewer. It would have been very different and the course of. Right now it’s like… an ekg!