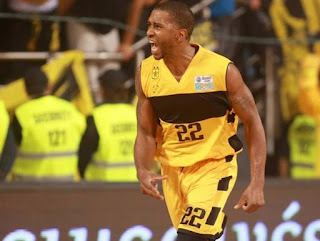 The ace of Mars Î¤Î¶ÎµÏÎ­Î» Mac Neal continues the exceptional performances and led safe to the group to qualify to “32” of the Eurocup…
With his statements, in fact he stressed: “this Is a very big achievement for our team. Started the year without knowing very well what to expect exactly, but I think we did a very good job, because we have protected our seat and we got two wins away. We brought the team in such a position, so that not only we move on to the next phase but we have the opportunity to claim the first position in the last race. We have a little bit more relaxed schedule these days and will be better prepared for the ÎœÏ€Î¬Î½Î²Î¹Ï„. We used to play a couple of times a week, now we don’t have a race in the championship, we’ll prepare a lot more correctly… you won’t be satisfied staying here… we Want to go even more”.
Mcneil asked about the element that made Mars different from the rest of the teams in the group, although it has the smallest budget and said that, “there is actually an element that I can think of now, and to say it. We are very hungry, we’re hungry team, we all want to excel and I think this might cover the fact that we’re a team with the smallest budget compared with other groups.”
In question for the presence of the world and in Bucharest, said that, “it is truly amazing what is happening. They’re the best fans I have ever seen and I’ve played in Europe. It was everywhere, supported us in every arena that we went to and this is very important for all of us in the group”.