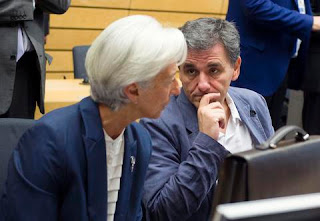 The Finance minister, Euclid Î¤ÏƒÎ±ÎºÎ±Î»ÏŽÏ„Î¿Ï‚ refuted, in a letter, the predictions of the… Fund for the development of Greek economy. Considers that the forecasts do not reflect the real picture of the Greek economy and the best of the planned performance has been achieved by Greece in the financial sector and growth. The letter of mr. Î¤ÏƒÎ±ÎºÎ±Î»ÏŽÏ„Î¿Ï… embedded in the IMF report on the Greek economy (article 4), which was published in.
“Despite the evidence and analysis presented, we observe that the report is not fair in a number of areas, while many of the conclusions are not consistent with the recent and well-documented empirical evidence,” notes in his letter mr Î¤ÏƒÎ±ÎºÎ±Î»ÏŽÏ„Î¿Ï‚ and clarifies: “First, the report presents an overall picture of the reform effort (Greece) that is not representative of the actual effort made by the Greek government during the program of the ESM (European Stability Mechanism). The implementation of structural reforms has accelerated considerably, in particular reforms in depth, such as the consolidation of insurance funds into a single fund, the total pension reform, the creation of an independent tax authority, many product market reforms (including a significant progress in the introduction of the recommendations of the OECD) and a wide programme of reforms. On the contrary, the report indicates a slowdown in the reform momentum, which is not apparent from what has already been done on fiscal policy, the financial sector and in many areas of structural reforms”.
Deception
The Finance minister notes that a result “of the misrepresentation of the reform effort” is not taken into account properly the effects of the structural reforms the Analysis of Debt Sustainability (DSA)”, and stresses that the increased effort should, in principle, lead to an increase in the potential growth rate in the future. However, he adds, the long-term rate of economic growth declined from the IMF in the analysis for the debt to 1% from 1.25% in May 2016 and is the second consecutive reduction in the forecast for the development of.
With regard to financial developments, mr. Î¤ÏƒÎ±ÎºÎ±Î»ÏŽÏ„Î¿Ï‚ stresses that “the financial performance of the 2015, and the financial result of 2016 is significantly better than the original estimates”. The IMF had originally envisaged a primary deficit of -0.5% of GDP in 2016, which will turn into a surplus of 1.5% of GDP in 2018 with the current statutory measures. “The initial indications show that, on the contrary, the financial surplus for 2016 will be in the region of 2% of GDP”, points out the minister, adding: “Despite the significant fiscal outperformer, the analysis (of the IMF) does not proceed to a major revision of the budgetary surpluses for the 2018 and after, keeping to the planned level of 1.5%, despite the overwhelming evidence to the contrary”.
Question
In addition to the need for budget revisions, the significant budget surplus in 2016 is questioning three important arguments in the report, continues in his letter mr Î¤ÏƒÎ±ÎºÎ±Î»ÏŽÏ„Î¿Ï‚. “The most important thing is that the argument that Greece can not maintain high fiscal surpluses, over 1.5% of GDP, contrasts with recent developments”.
Finally, with regard to the reference made in the report about the need for a growth-friendly policy mix, the minister states that “presented insufficient or misleading information about the effect of the current policy mix, and the results of the proposed new mixture”. “If you and we agree that the tax base should be broadened, this should be done by increasing the tax compliance and not with the reduction in the tax-free”, stressed the minister.