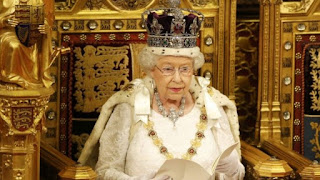 A new record…
shot down today, the queen Elizabeth ii celebrating the sapphire Jubilee, which marks 65 years to the british throne.
The queen, who celebrated 90 years in April, was on the throne at the age of 25, in 1952, after the death of her father, George vi, who died at the age of 56 years.
It’s tradition for the queen to pass in private the present day, in the estate of the Î£Î¬Î½Ï„ÏÎ¹Î³Ï‡Î±Î¼, in the east of England, and to return to Buckingham palace a few days later. Yesterday he smiled for the lovers of the monarchy who offered flowers as he left the church.
The anniversary is expected to be celebrated throughout the country, mainly in the Green Park and the Tower of London, where you will ÏÎ¹Ï†Î¸Î¿ÏÎ½ 41 cannon fire in honor of.
Commemorative coins were minted especially for the anniversary. These are gold coins of 5 pounds and 1,000 pounds, a weight of a kilo, sold instead of 50,000 pounds each.
On the coins was engraved a phrase that Elizabeth had said in a speech on the occasion of the 21st birthday from Cape Town where it was carrying out a tour together with her parents and her younger sister addressed to the Commonwealth: “my Whole life, whether long or short, be devoted to your service”.
The british post office, Royal Mail also issued a stamp of five pounds in the blue color of the sapphire.
A portrait of the queen, as photographed David Bailey, was distributed by the Palace. In the photo the queen time blue dress, and a necklace made from 16 large rectangular sapphires around which there are small diamonds, which closes with the same fastener combined with the same pair of hanging earrings. The jewelry was a gift of king George Î£Î¤ÏƒÏ„Î¿Î½ her wedding in 1947.
Over the years, the queen added to the father’s gift of a tiara -which was made from a necklace that originally belonged to the princess Louise of Belgium – and a bracelet to complement the original set. ÎšÏŒÎ½Ï„Î¹Î½Îµ the necklace so that the largest stone hanging to be given more prominence.
The queen has limited her travels abroad, but still performs official duties in Britain. In December announced that it will delegate to other members of the royal family’s role as the leader of dozens of charitable organisations, academic institutions and sports clubs.
In September 2015 he broke the record of longevity on the throne, which he held until then my great-great grandmother, queen Victoria.
Elizabeth is currently the oldest active monarch and the life of a monarch with the longest reign after the death of the king of Thailand ÎœÏ€Î¿Ï…Î¼Î¹Î¼Ï€ÏŒÎ» Î‘Î½Ï„Î¿Ï…Î»Î¹Î±Î½Ï„Î­Î¹, last October.