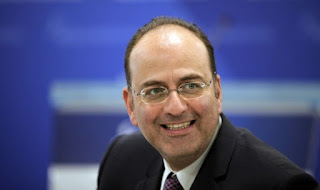 “Mr. Tsipras should be ashamed of that which makes the Greek citizens”, stressed in an interview on the radio station Real FM the Blessed Lazaridis…
The director of the Press Office of the SOUTHWEST called the prime minister “to be very, very careful when talking to the leader of the opposition, mr. Kyriakos Mitsotakis, who is wearing the jersey of the Greek National team -which as you know only too well, is the stars and stripes, and has pink shades – he says the same things and at home and abroad”.
Referring to the placement of mr. Tsipras in Parliament on “Prime minister”, mr Lazaridis said:
“The prime minister crossed every line of acceptable behavior. Touched the limits of vulgarity. In accordance with the rules of the Parliament is not possible at the time of the Prime minister to intervene, no other political leader, apart from the one who has tabled the question,” he said.
And continued: “I Want to remind you also that just before last Friday mr Î’Î¿ÏÏ„ÏƒÎ·Ï‚, although he asked mr. Cheney to speak after the reply of mr Tsipras, refused, citing the rules of the House. And then what did the prime minister? Do you remember? Hurried to leave hurriedly. Running in fact. So, well, well, mr Tsipras to leave the generalities, platitudes and lies, and refers to particular issues”.
“The government always takes long time to shut down the ratings. You want to remind you of the first half of 2015 you? With the famous and proud trading Tsipras – Varoufakis that cost 86 billion. euros to the Greek people, 25 billion. loss of national wealth, 6.300 euros in each household? To remind you of the first evaluation of their programme was closed with a delay of 14 months at a cost of 9 billion. taxes? Promised 12 billion. benefits with the program of Thessaloniki, abolition of ENFIA, reset of the minimum in 751, 13th pension, and I don’t know what else. Secondly, it cost us an eternal superfund and thirdly, a cutter of salaries and pensions of 3.5 billion. euro”, added mr Lazaridis.
“We, as a New Democracy,” he continued, “and personally, Kyriakos Mitsotakis, we never said “Go back madam Merkel” or “Go back Mr Schauble,” and then jumping to their feet to begging them to close the ratings”.
“The New Republic, the December 14 handed over a country in much better condition than it is today,” stressed the director of the Press Office of New Democracy, reiterating that it is the consistent position of the official opposition, for a primary surplus of 2% in order to create the necessary fiscal space.