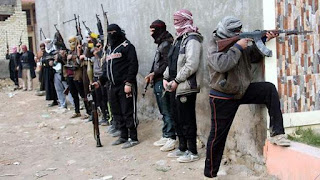 Jihadists of the organization Islamic State killed at least 30 Iraqi civilians, most of them women and children,…
they were trying to leave Fallujah, as broadcast on the american television network NBC.
“Fighters of the I. K. they told the men that if they wanted to leave the city, they were free to do so, but under one condition, they don’t take their families with them, and that if they were trying to do something like that he would be killed,” said a spokesman of the iraqi army on NBC last night.
Most of the 30 people who were killed by the gunfire of the members of the I.K. in Fallujah last Friday was women and children, added the spokesman.
The iraqi army and militias, with air support of the international coalition under U.S. leadership, launched an operation for the reconquest of the city on the 22nd of May. The Fallujah was occupied by the I.K. 2014.
The Fallujah, 67 km. west of Baghdad, the capital of Iraq, is one of the largest urban centers of the province Î†Î½Î¼Ï€Î±Ï.