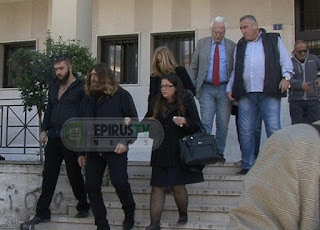 The scheduled for today trial for the case of Vangelis Giakoumaki ,was stopped for…
tomorrow, Friday 21 October ,at 09.00 in the morning .
At 09.00 today in the morning arrived at the court the three defendants , the former director of the Dairy School , the responsible of the outbreak and former mp Christos Markogiannakis .
The first two bear the charge of dereliction of duty ,while mr. Markogiannakis for instigation ,as it allegedly had intervened in order to qualify for favourable treatment ,students who by their behavior created problems in the School

Postponement requested one of the legal counsel of the Director of the School ,since he never got a chance to come in from Athens ,the second lawyer handling the case ,
The vast majority of witnesses were in the courtroom ,with a number of them have come from far away.
The trial was scheduled to testify as a witness, and the journalist -screenwriter, Elena Akrita ,however it has not been possible to be today in Ioannina ,as well as communicated with relevant document to the court has broken her leg ,with the result that the movement of the to be impossible .
He expressed the desire to found in the trial and to testify .
In the courtroom, and the parents of the tragic death of a student visibly overwhelmed, waiting for justice to be done for the soul of their child ,without which they are called to live their lives.
I failed of course to go yesterday afternoon to the point found dead the student to leave a few flowers and to light a candle in his memory .
Side by side with them and relatives, as well as the two private investigators who had dealt with the case of mr. Î’ÏÏŒÏƒÎ³Î¿Ï‚ and mr Tsoukalis, but a lot of people gathered outside the courts when he found out that today was going to start the trial for Vangelis ..
Source