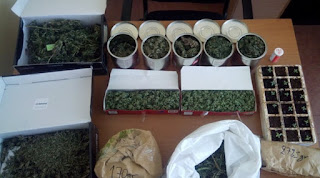 Only… pillowcases I hid the hashish in the possession of a… 58-year-old planter, in the area of Î Î±ÏÎ±ÎºÎ¬Î»Î±Î¼Î¿Ï… Ioannina! The officers of the Dea, they found large quantities of drugs in containers, in boxes, in bags, even in bottles!
During the course of the investigation inside the house of 58Ï‡ÏÎ¿Î½Î¿Ï…, found and seized a total of two pounds, and 451 grams of raw cannabis. Of these, one pound and 11 ounces were found in five metal containers, 815 grams in four cartons, 607,5 grams, three bags, and other 17.5 grams in a vial!
In the house seized even nurseries with 18 shrubs cannabis and 14 clones from pot plants at the stage of drying. The 58-year-old was referred to the public prosecutor at first instance of Ioannina, charged with possession of drugs with intent to distribute, and the inquiry for a full investigation of the action continues.