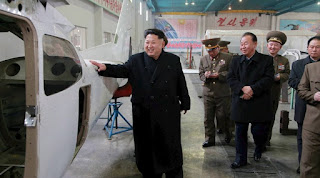 North Korea appears to be preparing the launch of a long-range missile, even…
one week from today, reported the news agency of Japan ÎšÏ…ÏŒÎ½Ï„Î¿ early today, referring to a Japanese official who kept his anonymity.
The official mentioned possible signs of a launch based on analysis of satellite images that depict the range test rocket in the Î¤Î¿Î½Î³ÎºÏ„ÏƒÎ¬Î½Î³Îº-ri, the west coast of North Korea, without giving further details.
The information coincide with discussions between the states of the United Nations Security Council for new sanctions on the country after the fourth nuclear test it carried out on 6 January. Earlier sanctions for nuclear and missile programmes of North Korea are still valid.
The most recent test long-range missile was in the country at the end of 2012, part of a program that experts believe aims to build an intercontinental ballistic missile (ICBM). It is also considered that North Korea is trying to reduce nuclear warheads to be able to be mounted on missiles, but many experts believe that it will take a long time to perfect the technology.
Yesterday in Beijing, the Foreign ministers of the United States and China agreed on the need for an important new decision from the UN Security Council for North Korea, but there are no specific signs of progress in the matter.
On 6 January, North Korea said that it had set off a hydrogen bomb, but the U.S. and other governments and experts have expressed doubts about the technical capacity of the country to carry out something like that.