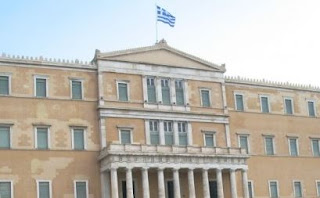 Read the announcement: “The Polar Leadership of the Ministry of Education, Research & church affairs, denounces… with document of the E.E.T.E.M, for the falsification of the law on Higher Education in the central page of the Ministry.
THE E.E.T.E.I recalled the legislation for Higher Education and calls for the immediate correction of the page of the Ministry, in accordance to what is stipulated in the applicable legislation.
THE E.E.T.E.M, as emphasized in the document, does not consider the specific incident that is due to an oversight, the same separation there was in the original version of the draft law ‘Arrangements for the higher education and research, and other provisions-Settings issues for the proper functioning and development of the hellenic open university”.
After the general outcry caused by the fact that, the Ministry of Education was forced to fold correcting the bill, but even in its final form, the separation still exists, at least to a point.
In fact this comes to be added and the initial under-representation of Sq.E.I the National Dialogue Committee with only 2 members out of a total of 36 members!
This fact has been pointed out, during the recent Summit, Presidents Sq.E.I, to the competent If. Minister of Education, mrs. Sia Anagnostopoulou, which has committed itself to the enlargement of the composition of the Commission, something which was done with the addition of Commission 7 additional states from the area of Sq.E.I.
I really wonder, what can be the reasons that lead to the Political Leadership of the Ministry of Education to remember the T.E.I always ex-post.
With regard to the establishment of a Committee on National Dialogue on Education, the move of the Ministry of really raises questions about the appropriateness of a recommendation, given that there are already institutionalised by the state institutions (E.YOU.II, P.A.T.E, P.A.E.E, etc.), which is competent to give opinions on matters of educational policy !
In addition to these was established the Council of National Policy on Education (N.4283/14) , which is composed of all the also past Ministers of Education!!
THE E.E.T.E.With recalls, for the umpteenth time, that:
the problems facing the area of Education, and especially Higher, it’s here, and years known.
What is missing is not the large Panels (the effect of which, in most cases, is doubtful), but the political will to solve them.
It is called the Government, to convene immediately the already established Institutions of expression of Opinion, which are supervised by the Ministry of Education, at the same time to resolve the pending matters of the Bedroom.AND.E.I then envisioned the new EDUCATIONAL strategy of the country, taking advantage of existing institutions but also the repeated suggestions of the E.YOU.E. ”