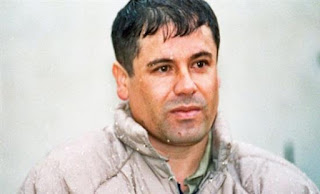 The american television network Univision, which broadcasts in the Spanish language, announced Tuesday that project by the end of 2016 an exclusive series on the theme of the life of baron of the drug Joaquin “El Chapo” Guzman, the script of which he wrote an ex-trafficker from Colombia.
El Chapo was arrested Friday in Los Mochis, in the state of Sinaloa, Mexico (northwest), six months after the spectacular escape from the maximum security prison Altiplano.
Thanks to accomplices within the prison, the notorious criminal had escaped last July from a tunnel that had been dug under the shower of his cell, which resulted in a tunnel length of 1.5 km, which, in turn, ended up at a construction site.
And if one considers that already the above events, which discusses the film “The runaways” have not to a sufficient degree… “perfume Hollywood”, the story does not stop here: the fugitive he met the Mexican actress Kate del Castillo and the American actor Sean Penn, who gave it to me this Weekend published an interview with the drug kingpin in Rolling Stone magazine.
“The story of Chapo Guzman is one of the most exciting of the last year and we are excited that we will be able to have a view from the inside about the world” that had formed and lived, pointed out in a press release Alberto ÎšÎ¹Î¿Ï…ÏÎ¬Î½Î±, programme director of the network Univision.
If Sean Penn was the one who met El Chapo, the writing of the script of the series I was assigned to him, but the Men Lopez, a former member of a colombian drug cartel who, after serving many years in prison in the prisons of the united states, managed to exorcise the old demons writing successful projects including a biography of the Spanish language.
“In addition to incorporate recent developments of the escape and capture (El Chapo), this unauthorized look at it will penetrate to a depth in the life of this man over the empire of the drug” points out the network added that the shooting will start soon and will be completed soon in order for the series to be screened by the autumn of 2016.