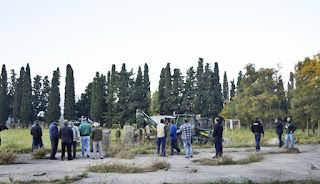 Early in the morning they hit again the bells of Saint. Paul in Î›Î¹Î½Î¿Ï€ÏŒÏ„Î¹, from… residents of the Î›Î¹Î½Î¿Ï€Î¿Ï„Î¯Î¿Ï…, calling on people to gather in the area to stop the Army, that on the morning of Monday has begun work on the creation of a Hot spot.
People gathered immediately and the work stopped, however, as the machinery of the Army, remain in the area, so it remains, and the world, that never leaves if you don’t leave the machines.
According to latest information of Kostoday, the machinery of the army left the point, and has now placed mlia hoe of the municipal community, to prevent the entrance, while hindering the passage of vehicles from that point. Police car is at the traffic lights at the intersection to Tigaki and urges drivers to make a detour.
Source