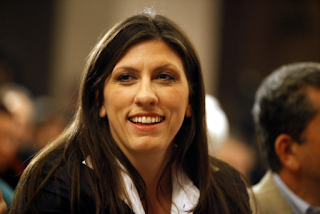 The intervention of prime minister Alexis Tsipras…
on Saturday night in the session of Parliament in the context of the debate on the budget of 2016 caused the reaction of the Life Konstantopoulou.
“Suddenly people have discovered in the last two months that there is Ï†Î¿ÏÎ¿Î»Î±Î¯Î»Î±Ï€Î±, Ï†Î¿ÏÎ¿ÎºÎ±Ï„Î±Î¹Î³Î¯Î´Î±, a cruel and shameful, what was the name of some, burdensome, odious, and shameful memorandum, while all previous memoranda was the best I had ever encountered the place,” said mr. Tsipras. This is without a doubt on characterizations and expressions that have been linked with the former speaker of the House.
In response today, via Twitter, the Life Konstantopoulou referred to in the video with the statements of the prime minister last Saturday, but other of the same and of the Panos Kammenos “when they were talking about audit for the onerous and disgraceful debt”.
Source