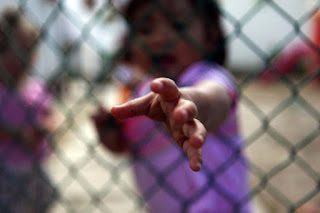 Shocked are those who were in front of the incident of attempted abduction of a… child from a playground in Heraklion, but also those who have read the relevant post made in the facebook
A mother who was an eye witness described the incident, and the agonizing effort of the mother when he found that an unknown woman had grabbed the child. All were made in accordance with the suspension that was online, yesterday, on the playground, which is near the seaside avenue of Heraklion. There the mother was with her little boy, age 3-4 years, which was playing with other children. All of a sudden, at an unexpected time a woman to other elements came and took the kid within seconds!
The mother found immediately to the rapture of her child, and started looking for it. Eventually, he saw on the road in the far distance together with the unknown woman. He ran and managed to get back her child. The shocking thing is that the woman had changed her shirt for the child to not be recognizable. While wearing original orange t-shirt, the mother found time grey!
The unfortunate thing is that the mother didn’t press charges or call the Police on the spot…
Source