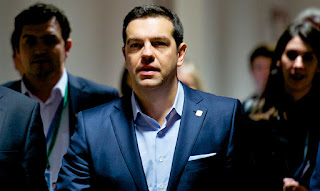 As published by the Daily which contact with the head of the program of negotiations of Harvard university, professor…
Robert ÎœÎ¿Î½Î¿ÏÎºÎ¹Î½, for this negotiation, mr. ÎœÎ¿Î½Î¿ÏÎºÎ¹Î½ is one of the leading in the genre. With a rich literature, and especially well-known in the international market, as it had an advisory role in a series of negotiations, such as in the dispute between Walloon and Flemish in Belgium, the middle East, but also in multinational companies.
Last year, therefore, followed with particular interest, from the other side of the Atlantic, perhaps the largest trading for 2015: in the Greek government with the European partners, which today features “it’s definitely one of the worst of the year”.
For the experienced teacher, the negotiation basically divided into two periods. The first lasted until the end of February, when the government managed the elongation of the programme and the European partners have suggested that it may show more flexibility with Greece. “At that stage I thought that mr Tsipras and mr Varoufakis have made a good deal”.
Deterioration
The second phase, the Harvard professor of the mount after the agreement elongation and until the final agreement in July. “There did a very bad job. Mr Varoufakis did not understand the importance of good professional relationships with their partners. Instead I dealt with a “rhetorical flourish” as she says. For the American professor, that you should always have in mind the one who negotiates -and plays a particular importance for the result, is that “the interpersonal relationships play a very important role, as the trading is not based on abstract concepts”.
Impression caused that mr Varoufakis, while negotiating he continued to write in his blog by making rhetorical comments. “Advertised himself as a smart and an expert on game theory and he was building a situation in which the Troika will back out, which never happened anyway”. For mr. ÎœÎ¿Î½Î¿ÏÎºÎ¹Î½, the then minister of Finance and mr Tsipras “had managed to become hated”.
For the American professor of the Greek side believed in the game of a frontal collision (chicken game) with the E.E. considering that the Europeans will withdraw first and this is why the negotiations lasted so long. This, however, it puzzled me the most was the decision for the referendum. “It was a tragic idea. Citizens should not take such political decisions, especially when the question is so technical,” he said and added that it seemed very strange that the Greek government believed that a “No” would have made the Europeans to give them more elasticity.
As he notes, the Greek side with the referendum lost any negotiating pressure, and the reason was that the markets had decided that even if Greece out of the euro, this would not have a direct economic impact in the West. “The Greek economy is not so important, as it seemed, in the global economy,” he says.
Mr Varoufakis, who had planned that game theory didn’t even have a deal if mr Tsipras supported him, she says with surprise in the “K” mr. ÎœÎ¿Î½Î¿ÏÎºÎ¹Î½. “For me, it was impressive that he concluded to resign immediately after the referendum, is proof that mr. Tsipras was hesitant as to the exit of the country from the euro”.
For the special in the negotiations, something that was extremely dangerous for the Greek economy and while no one could say with certainty what the consequences would be from such an exit, there were huge risks. Finally, the Greek government ended up with a worse deal because it was more desperate, says mr. ÎœÎ¿Î½Î¿ÏÎºÎ¹Î½, and adds that the referendum as a threat failed because the government was not prepared to withstand the consequences of an exit from the euro. As he says to his disciples: “never make a threat that you can’t make”.
Source