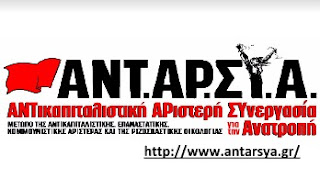 THE ANT.NO.YOU.A. denounces the persecution that aims to suppress the movement against the auctions…
people’s residence and property, and directly turns to the detriment of the members of the Coordinating Collectives of Thessaloniki, Live ÎšÎ»ÎµÎ¹ÏƒÎ¹Î¬ÏÎ·, lawyer, member of the Alternative Initiative of Lawyers and agent. member of the board.P. the Bar Association of Thessaloniki and Elijah Î£Î¼Î®Î»Î¹Î¿Ï…, teacher, grade advisor Ambelokipoi-Menemeni municipality and state.P.The. ANT.NO.YOU.A.
Against the two activists has been exercised ex officio a lawsuit for their participation in the mass demonstrations and action against the auctions. An ex-officio lawsuit that came after an anonymous and completely vague complaint, which was enough to start from the office of the Prosecutor of Thessaloniki preliminary examination.
Putting on the target the action of the Coordination of Collectives, it becomes clear that the persecution directed against the popular mobilisation against the auction. Together with the cheap government propaganda that the auctions supposedly not related to the people’s house and fortune, but some “villas in Ekali”, the prosecution of this aim is to terrorize the people so as not to resist the plans of the government of SYRIZA-ANEL, E.E. and of the banks. Together with their anchorages, such as various Î¼ÎµÎ³Î±Î»Î¿ÏƒÏ…Î¼Î²Î¿Î»Î±Î¹Î¿Î³ÏÎ¬Ï†Î¿Î¹ and the forces of repression, attempting to loot what’s left of the people’s property for the sake of the banks, which have already sucked the blood of society with the endless recapitalisations by E.E. and D.N.T. together with the governments of SYRIZA-ANEL-SW-PASOK and other memorandum forces “moving in Europe”.
With the lawsuit against the members of the movement want to hit in the first steps of a movement fighter and dangerous overall for the policy. Knocking on the Coordination of Collectives of Thessaloniki and all independent centers race “popping up” all over the country, and with more and more firepower they give a fight tenacious, without expiry date, without the yard sales and negotiations “for the sharing of poverty”. Against this struggle are turning, because they know that such a match can integrate more and more, anyone who wants to sublimate the rage for all the things that weight us are in action to topple them, without waiting, would-be saviors, and assignments.
THE ANT.NO.YOU.A. who supported you from the first moment the movement against the auctions, calls on all people to unite and strengthen this movement, which today is fighting a battle against the grabbing of the people’s residence and property, and tomorrow, against all the evils which the policy of governments and.E. they brought to the social majority.
We demand the immediate cessation of the persecution of two of our comrades, and of every member of the movement.
THE TERRORISM WILL NOT PASS! THE FIGHTS DON’T Î ÎŸÎ™ÎÎ™ÎšÎŸÎ ÎŸÎ™ÎŸÎ¥ÎÎ¤Î‘Î™!
THE STRUGGLE TO FIND A POP A HOUSE-TO-HAND STATE, AND BANKS, CONTINUES!
UNTIL VICTORY AND THE REVERSAL!