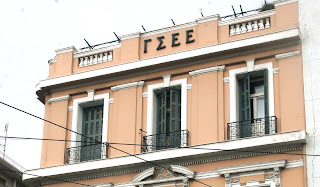 Read the announcement: “THE GSEE is on the side of the… former president of the association of Technicians of Greek Radio Dimitris ÎšÎ±Î¼Î±ÏÎ¹Î½ÏŒÏ€Î¿Ï…Î»Î¿Ï…, who is on trial on 8 January for defamation of a public limited company ,on the communications of team quick step summer cycling for the radio station FLASH 96 in 2011,so and the property was moving in a series of redundancies .
Such actions targeting the industrial action is condemned and when the course and the developments confirm fully the employer’s arbitrariness .
The GSEE condemns the criminalisation of trade union action, and stresses once again that such actions and practices can be an obstacle to the goal of trade union action, which is none other than safeguarding the rights of the world of work.”