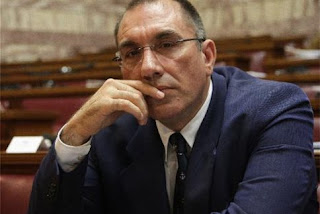 Statement of Congressman Dimitrios K. Burning for a new bill that… handed it over to the vice-chancellors of the universities, the Education Minister Nikos Friend and the Deputy Minister for Sia Anagnostopoulou.
The new Bill for the Education they delivered to the rectors of the universities, the Education Minister Nikos Friend and the Deputy Minister for Sia Anagnostopoulou, in the midst of a crisis brought a reduction in funding from the Ministry of Education this year by 22%.
As an example, the new bill includes a total reset of the eternal students that had been deleted in accordance with the previous law, while, will retain the status of the student up to the qualification. At the same time, the students will have the right to interrupt their studies with a written request for as many semesters or don’t want, without, however, having student status at the relevant time.
Still, restored the university asylum as it was before the law Diamantopoulou while returns and also the participation of students in the promotion of Ï€ÏÏ…Ï„Î±Î½Î¹ÎºÏŽÎ½ elections was abolished, and with the use of ballot boxes now.
The Member Dimitrios K. Glowing said:
“This bill looks like it will cause intense debate and concern in the next few days. The announcement of the reintroduction of perpetual students estimated that their number exceeds the $ 150,000 doesn’t seem to serve any purpose while, on the contrary, re-creates a situation of stagnation in the Institutions.
Moreover, the provision of the bill that enables the students to interrupt their studies with a written request for as many semesters or don’t want is enough to deal with phenomena that students are indeed for personal reasons may not attend the courses. However, even in this case you will need to provide supporting documents that verify the lack of monitoring and there is a reasonable upper limit stop.
The emergence of Ï€ÏÏ…Ï„Î±Î½Î¹ÎºÏŽÎ½ elections with the participation of students was abolished, and with the use of ballot boxes now raises serious questions about whether it will be again viewers episodes during the elections with the students to try to steal or destroy the ÎºÎ¬Î»Ï€ÎµÎ¹Ï‚. To avoid such incidents, the voting may be carried out in the first place electronically, in order to avoid both the conflicts and the attempts to falsify the results.
Another serious issue which creates great concern and reflection is the reintroduction of the asylum which again puts issue on good management of crises and tensions in general.
It is known to all of us that the University asylum unfortunately, it has nothing to do with the preservation of the same, within the space of the University as a case of the student movement and the University community.
On the contrary, very often used by people who objectively undermine in every way. The university community has been quite a few times faced with violent incidents, which, unfortunately, does not have the ability to cope alone. The area of the transmission of knowledge and of the letters may not be used by anyone and for any as a shield to cover the unlawful actions of the.
In closing, I would like to add that the changes which the bill is anything but encouraging for the field of Education that would have traditionally be characterized by innovative changes and reforms but, nevertheless, suffers once again from outdated perceptions that us turning years back.
The revival practices were first introduced 30 years ago will not manage nothing more than to sink in the darkness of the Education by restoring the corruption among the teachers and students and transforming the University into a hotbed of party functionaries, pensioners and student in space and abetting of lawlessness”.
DIMITRIOS K. ÎšÎ‘ÎœÎœÎ•ÎÎŸÎ£
Mp B Piraeus
INDEPENDENT GREEKS