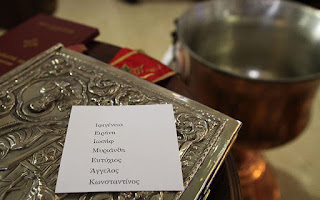 Seven children, they were baptized, on the feast of St. Anthony, in a group baptism in the Holy Temple of God’s Wisdom in Strovolos, with all the costs to the …
Holy Archbishopric Of Cyprus. Children baptised seven priests, and they took the names, Iphigenia, Peace, Joseph, ÎœÏ…ÏÎ¹Î¬Î½Î¸Î·, Eftychios, Angel, and Constantine.
The Archbishop of Cyprus Chrysostomos B` read the wishes. There were seven fonts with seven priests. The wishes were shared by all the children, and only the surface-diving into the water was done separately for each child.
In his statements to CNA, visited the church of the Archdiocese, Archimandrite John had mentioned that due to the economic crisis there are many families that can not go to the baptism of their children, which is why the Church has undertaken this project, and task. The problem brought before the Church, the Office of the Commissioner of Volunteering and Non-Governmental Organisations coordinated meetings of families with Archbishop Chrysostomos.
As stated at the HEAD of the Commissioner Yiannis Yiannaki “will follow eight other baptisms”. In accordance with the Î ÏÏ‰Ï„Î¿ÏƒÏÎ³ÎºÎµÎ»Î¿ of the Archdiocese if the families are unable to find contractors, â€œthe Church has serious people to whom he can entrust them to this god’s workâ€. The seven children that they were baptized included two aged four and five years old, and one from Syria. Three families have found wealthy sponsors, who will help their families to overcome the difficulties faced.
Source