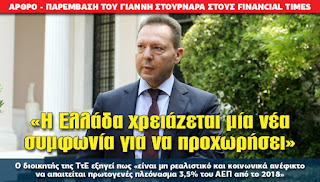 A new agreement between the Greek government and the lenders, asks an article in the Financial Times, Yiannis Stournaras….
The governor Bank of Greece stresses that “now is the time to find a balance between reform and a reduction of debt”.
“Now, Greece needs a new agreement with the partners and the lenders, in order to proceed. It is non-realistic and socially impractical to require Greece to achieve a primary surplus of 3.5% of GDP by 2018. This must fall in the 2%, allowing for a more balanced economic policy, with emphasis on the reduction of taxation, encouraging private sector investment and contribution to sustainable growth”, says mr Stournaras.
It even makes reference to the scenarios of the Bank of Greece show that sustainability can be reached debt with a final primary surplus target of 2% and one on measures to provide debt relief that does not cause losses to the lenders. “This would include extension of the Ï‰ÏÎ¹Î¼Î¬Î½ÏƒÎµÏ‰Î½ of loans by 20 years and payments of interest in equal installments for a period of 20 years,” he writes, even in the peer reviewed economic journal.
On the debt, points out that the Europeans have yet to realize the promise of further relief. Noting that they had agreed to this in November 2012, to become the 2014 something that did not happen, that at the Eurogroup on May 24, the same thing happened, with the Finance ministers of the eurozone to postpone again the decision for 2018.
“It should be stressed that the Eurogroup postponed the decision on reduction of debt than the following: firstly, that the Greek government reneged on its commitments and, secondly, that the current interest rates of the market is very favourable for decisions to alleviate debt, both for borrowers and for lenders. In addition, the threat of Grexit, which has been used against Greece by some politicians of the euro zone each time it seemed to delay the negotiations, fuelled further uncertainty and adversely affected the economic and social climate in Greece,” writes the governor of the Bog.
Mr. Stournaras stresses, furthermore, that the government, the Bog and the banks will have to face the most serious threat to financial stability, non-performing loans.
“Lower end-financial targets and reducing debt is the motivation to continue to move the Greek economy and society. The reforms, privatization, development of public real estate, enhanced tax collection and reduction of “red” loans are the actions of the Greek politicians need to do, with determination and a spirit of national unity, in order to achieve high and sustainable growth,” concludes the head of the financial system of the country.
Source