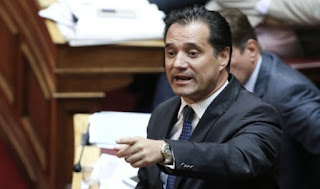 There is still no agreement, the only thing there is the agreement for the return of troika in Athens, said the…
vice-president of the New Democracy, Adonis Georgiadis. Speaking on SKAI, mr. Georgiadis stressed that the only thing that is known is that we have measures of 2% of GDP, that is 3.6 billion euros, with the objective of the tax-exempt and pensions.
Mr Georgiadis noted that the constant celebrations of ministers is an insult to the intelligence of the Greek. Featured nonsense, the return of the 14 pension.
Referring specifically to the pension, he stressed that the abolition of the personal difference it will cut pensions by 7% to 30%, while pointed out that the SW will not vote for the agreement, which, as rated, will go to the Parliament with a law and an article.
He reiterated the request of the opposition for the elections, saying that the answer of the SOUTHWEST is a massive liberal reforms and acceleration of the economy.
Estimated that if today’s elections the SOUTHWEST will be able to get a better deal with fewer measures.