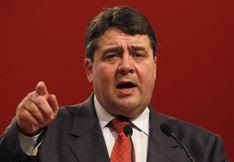 Debt relief, “provided that Greece continue to deal seriously with the reforms’, calls for the vice-chancellor of Germany Î–Î¯Î³ÎºÎ¼Î±Ï Gabriel, warning of the risk that the ongoing cuts could lead to social unrest and make the country non – ÎºÏ…Î²ÎµÏÎ½Î®ÏƒÎ¹Î¼Î·.
In his article, which is published in the Athenian Î ÏÎ±ÎºÏ„Î¿ÏÎ¯Î¿ ana-MPA and in four major european newspapers (El Pais, Le Monde, La Republica, Frankfurter Allgemeine Zeitung), the head of the German social Democrats categorically rejects the recommendations for closure of borders and the exclusion of Greece from the Schengen area, therefore making for proposals “poison the european dialogue”.
Featuring “almost cynical” warnings to Greece for the better guarding of the borders, while recalls that most of the money given as aid to Greece reached the international lenders, and not the Greek economy.
Mr. Gabriel attempts to remind the countries of Central and Eastern Europe the history of european integration and the position of their countries in this process, while describing the advantages of the “european dream” and the importance of deepening the cohesion of the Union, the elimination of inequalities, and of common action, in order to meet the global challenges.
Referring specifically to the refugee crisis, it is uncertain how it is possible to be so many billions in order to save the banks, but not to save people, addressing in his country, warning that “as long as Germany restricts itself to calls for solidarity in the reception of refugees, but is not prepared to invest more in growth and jobs in Europe, no one will come to help us”.
Source