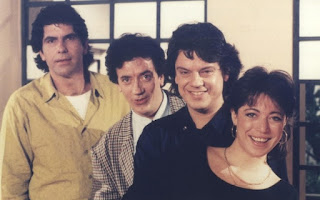 For the “Unacceptable” and the decision not to concerned with the acting, but with writing, spoke in an extensive interview in “People” magazine Dimitra Papadopoulou.
The beloved series has long enough be played in repeat in the Mega and the creator explained why: “writing for me is a way of life. From there, of course, plays a role that earning my wages for this. But the money for this job in Greece is very little. Neither of them â€œUnacceptableâ€ made serious money. I asked for a copyright for many years for reps, but can’t afford to pay me, so I don’t played anymore.”
As far as the gay role she originated Giannis Bezos, Dimitra Papadopoulou said: “In the beginning was not very welcome the idea, but he was very supportive of the Johnny Kalimeris, who was in the channel and because we thought of that too, along with my producer, Frosso Ralli, we insisted. With friends and the world that I had shared back then were all encouraging”.