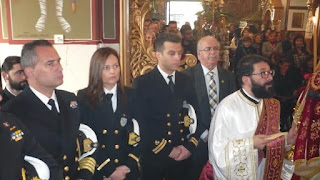 Read the announcement: “Guest of the local parish, the Mayor of Chalkida Christos Pagonis attended the Sunday 13 December in the events that took place in memory of Saint Porfyrios, in his hometown in Agios Ioannis, Municipality of Kymi â€“ Aliveri.
In the Church of St. Demetrios celebrated the Sunday morning matins, which was officiated by his Eminence Metropolitan of Kifissia, mr Cyril. In the Divine liturgy that followed, officiated by his Eminence Metropolitan of Karystia and Skyros, mr. Seraphim, and concelebrated by the Bishops of Piraeus, mr. Seraphim, Chalkida, mr Chrysostom, Ilion, mr. Athenagoras, and of Kifissia, mr Cyril.
In the small procession in the main streets of the village, she was the head of the Philharmonic of the Municipality of Chalkida, under the direction of conductor E. Prokou, and indeed his Eminence the Metropolitan of Karystia and Skyros thanked the Mayor X. Pagonis for the presence of.
ANNEX
ÎŸÎ£Î™ÎŸÎ£ Î ÎŸÎ¡Î¦Î¥Î¡Î™ÎŸÎ£
The Saint Porfyrios was born on 7 February 1906 in the village of Agios Ioannis Aliveri. The secular name was Evangelos Bairaktaris and very early showed an inclination towards the monasticism. So, at the age of 13 years old, and having finished only the second Grade, went to the Skete of the Holy Trinity, the well-known “ÎšÎ±Ï…ÏƒÎ¿ÎºÎ±Î»ÏÎ²Î¹Î±” of mount Athos, where he lived for the next 6 years, as a submissive to two elderly monks, taking the name Nikitas. Then, due to serious illness, was forced to return to Euboea, where he settled in the Holy Monastery of St. Charalambos White, Avlonari.
At the age of 20 he met with the Archbishop of Sinai Porphyrios, who, recognizing in him spiritual gifts, ordained elder, giving him the name by which it was to become known. In the next few years, because the monastery of St. Charalambos White was female, the for. Porphyry was installed in the Monastery of Saint Nicholas in Ano Vatheia in Evia.
In 1940, at the age of 34 years old, went to Athens, where, on 12 October he was appointed as Vicar in the church of St. Gerasimos, in the Polyclinic of Athens, in Omonia square.
On 16 March 1970, having completed 35 years, received a small pension from the Insurance Fund of the Clergy of Greece and withdrew from the position of the vicar of St. Gerasimos, where he continued to offer his services as 1973. In that year he left Athens to be installed initially in Agios Nikolaos, in the ÎšÎ±Î»Î»Î¯ÏƒÎ¹Î± (now Kallithea) for the case and after a few years at Milesis the last event, where he built the Holy monastery of the Transfiguration of the Saviour. He gained considerable reputation and many of the faithful visited him in the place of residence.
In November 1991 he went to the old cell, the ÎšÎ±Ï…ÏƒÎ¿ÎºÎ±Î»ÏÎ²Î¹Î± of mount Athos, where he died on 2 December of the same year,
He enlisted in the Hagiology of the Orthodox Church, by the Holy Synod of the Ecumenical Patriarchate, at its meeting held on November 27, 2013.” 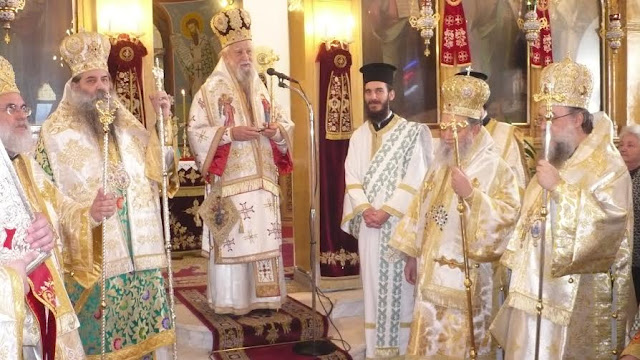